″Wagner and the Amazon Fit Wonderfully Together″ | Culture | Arts, music and lifestyle reporting from Germany | DW | 25.04.2007

Christoph Schlingensief not only set Richard Wagner's "The Flying Dutchman" in the Amazon, he spent several months there rehearsing it. Germany's star director spoke with DW-WORLD.DE about the draw of the jungle. 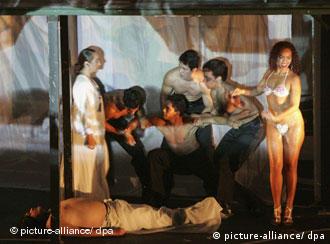 Christoph Schlingensief's production of Wagner's famous opera premiered this week in the north-western Brazilian city of Manaus, the capital of the Amazon. Bikini-clad samba dancers and opera singers alike performed in the Amazon Theater, which is known from Werner Herzog's 1982 film "Fitzcarraldo," starring actor Klaus Kinski as an Irish rubber baron. The production is set to travel to Germany and Austria, before returning to Brazil for an encore.

DW-WORLD.DE: A soprano who had performed in Manaus said recently that it was an "extreme experience" to sing in the Amazon city. Was it also "extreme" for you to work in Manaus?

Christoph Schlingensief: It was extreme, and therefore also productive. Just sitting under German cafeteria lights makes you blind. We were here for nearly three months and I wouldn't have missed a day.

In spite of the Amazon's "Festival of Opera," the audiences in Manaus aren't as familiar with opera as the European audiences are. Was that an advantage for you?

Was it important to you that the Brazilian participants got to know Wagner, or was there little time for that?

When you rehearse for two months and the participants, technicians and slum residents hear Wagner the whole time, then it's nothing special. Here, Wagner is just normal music. It's not as important as it is in German living rooms. Only in so-called Wagnerian circles do people try to keep him antiseptic. No one here is interested in that kind of thing.

Some 25,000 people attended the open-air premiere on April 20

Samba, Afro-Brazilian rituals, poverty and women in bikinis -- why did you choose to use so many Brazilian cliches?

Poverty as a cliche? Have you seen how many people sleep on the streets here?

Are you planning to bring the Manaus team to Germany to share this Wagner-samba-production with German audiences? 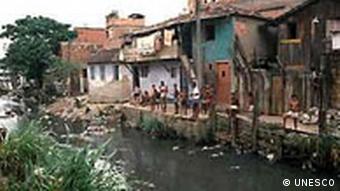 Proverty in Brazil is more than a cliche, said Schlingensief

The production is going to Sao Paulo first, then probably to Germany and Vienna. Since the show has been such a big success, the secretary of culture for the Amazon has already invited us back to Manaus next year.

Why did you choose to make a reference in the opera to the film "Salo" by Italian director Piero Paolo Pasolini, instead of Werner Herzog's 1982 film "Fitzcarraldo," which also would have been appropriate? Why did the Brazilian setting inspire you to use Pasolini's screen version of the book "120 days of Sodom"?

I can't say much about Brazil as a whole, but the colonial period, the "rubber period" in Manaus, was a time in which everything looked the same. There were filthy rich industrialists, an opera house, brothels, child sex, perversion -- even today the region is still suffering from sex tourism. The airline Varig recently staged a campaign that brought up the issue of child sex.

(Actor Klaus) Kinski filled the jungle with Wagner music (in Werner Herzog's film "Fitzcarraldo.") With a gramophone. But we were on tour with a whole orchestra. I'm more interested in the idea of a forced opera than a private one.

The German media focused on Manaus as the setting for "The Flying Dutchman" and Wagner seemed to take a backseat. Was it your intention to emphasize Brazil over Wagner? 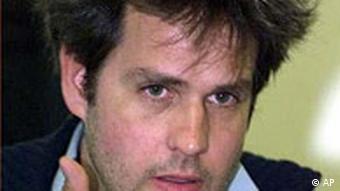 Schlingensief, 46, is known for productions that are way outside the box of tradition

Brazilian writer Milton Hatoum, who comes from Manaus, said the city and the primeval forest are "two different scenarios, two lies separated by the river." Having spent over two months in Manaus, do you agree with this description?

The difference is not the river. That's nonsense. There's also a big city jungle. And Manaus has over 1.8 million residents. I think the primeval forest is melancholy and true to the bone. The city is still trying to belie this. The other side is waiting for its attack. That's why we were on the other side very often. In the primeval forest.

Naked senior citizens, countless liters of stage blood, a homosexual couple and US soldiers at Abu Ghraib: It sounds more like the script for an art house film than an 18th century opera. (23.04.2007)

Controversial German director Christoph Schlingensief is planning a stage production and a new film about the last hour of Princess Diana's life. (05.09.2006)

Christoph Schlingensief's controversial rendition of "Parsifal" concluded the first round of the program at the Wagner Festival Wednesday in what may be the most daring production to come from Bayreuth. (03.08.2006)