In the northern Bavarian city of Würzburg, soak up centuries of histories, sample Franconian wine -- and beware of painted dogs.

A small dog looks over a balustrade at a group of tourists following their guide through the palace grounds. The tourist guide comes to a stop, notices the dog and warns his audience, "You probably think that the dog will leap on to you at any moment -- but don’t worry, it’s an illusion. It's just a painting."

The dog is a creation of the Venetian painter, Giovanni Battista Tiepolo. He designed the frescoes in the hallway of the princely palace of Würzburg, which Napoleon ridiculed as the "most beautiful parsonage of Europe."

UNESCO, on the other hand, chose to add the Episcopal Palace to its World Heritage List in 1981. 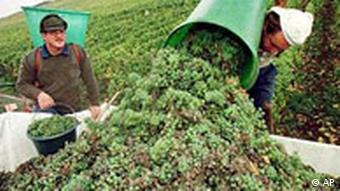 The regular tolling of the church bells is as much a part of the city as good Franconian wine. "Boozing on wine is a sin, drinking wine is praying," say the residents of Würzburg.

The vineyards are at least as old as the city itself -- and Würzburg is more than 1,300 years old. In the early days, the religious bishops used to rule from the palace overshadowed the lowly subjects on the Marienberg.

But by the beginning of the 18th century, the bishops supposedly had had enough of life at such a high altitude. They commissioned Balthasar Neumann to design a lavish residence for them. The result was the pompous princely Episcopal Palace that glitters like a diamond.

The high priests didn’t just build castles for themselves, but also churches for the common folk. Numerous red, elaborately ornamented church spires tower up from among the sea of houses in the center of the city.

Out of the ashes

The Baroque ambience of present day Würzburg has more to do with the residents than the church. On March 16, 1945, Allied bombs reduced more than 90 percent of the city to ashes. Instead of despairing, the residents of Würzburg promptly set about rebuilding their destroyed city.

Today, exquisite stucco works and facades enchant the hordes of tourists who begin their sightseeing tour through Würzburg along the street called the "Romantische Strasse." 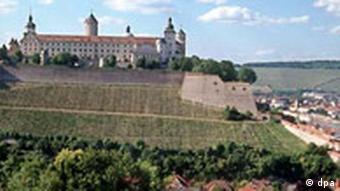 In earlier times, traveling wasn't as easy as it is now. Those who managed to were more interested in trade than sightseeing. However, the Main River posed an almost insurmountable obstacle and was crossable at only a couple of places.

One of these was the ford at the present-day Würzburg. It wasn’t long before artisans and traders moved into the strategic area to offer their services and wares to passing travelers and ships.

Trade is still important to Würzburg's economy. Money isn't just earned in the Bavarian city, it's also made -- literally. Many different countries' banknotes, as well as newspapers like the "New York Times" are printed with the help of Würzburg printing presses. Unfortunately for get-rich-quick schemers, they aren't available to just anyone.

Of all the scenic travel routes in Germany, the so-called Romantic Road is the most famous. But there are more than 150 such routes worth discovering. (10.07.2005)

Bavaria's new Sightsleeping brand was designed to offer tourists more than just a place to crash for the night. A jury selected 12 hotels in southwestern Germany that have said "Auf Wiedersehen" to boring uniformity. (15.01.2007)

The Natural Park Franconian Forest lies right in the middle of Europe, equidistance from Munich, Berlin or Frankfurt. It is easy to reach by car, train or bus. But its trademark is its striking landscape. (14.04.2006)

The City of Würzburg