At its first shareholder meeting since its pollution scandal broke last September, managers at German carmaker VW are girding for tough questions from investors. Fresh accusations and probes are an added irritation. 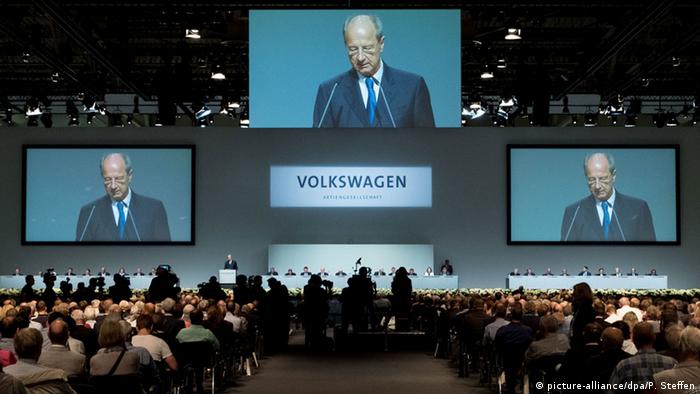 It's the first time that VW shareholders have come together for their annual meeting since the Dieselgate scandal involving emissions test rigging on a huge scale unfolded in autumn of last year.

The Hanover get-together is also the first investor meeting since newly elected Chief Executive Matthias Müller outlined plans to turn Europe's largest carmaker into a company moving away from diesel technology and focusing on e-mobility, autonomous vehicles and car-sharing schemes instead.

The most recent business figures coming from the Wolfsburg-based company have show that reclaiming lost trust will be an uphill battle. Sales in the first five months of 2016 were 2 percent lower than a year ago, with a 13-percent drop in the number of cars shifted in the US.

VW executives went over backwards in Hanover to secure a vote of confidence in the board amid angry accusations from a number of investors saying the lack of independent directors on the supervisory board was likely to have stood in the way of a proper scrutiny of managers and their role in the pollution scandal.

Media reports suggested upfront that an outright rebellion was unlikely, though, since the Porsche/Piech family, who own 52 percent of the shares, signaled their support for the management.

Supervisory board chief Hans Dieter Pötsch said Wednesday management was resolved to meet the challenges of the future and contribute to every aspect of the pollution scandal being looked into, indicating that nothing would be swept under the carpet. Investigations were continuing, he added, into who exactly was responsible for installing the so-called defeat devices in more than 11 million cars globally. He regretted not being able to present the whole picture to investors yet as lawsuits against the company were in progress in the US.

Pötsch added that damages might be claimed from some former or current board members, should the situation require such a move, which he said would be made regardless of whether mangement was cleared or not in Hanover.

VW has so far set aside about $18 billion (16 billion euros) to cover the cost of vehicle refits and a settlement with US authorities. But both analysts and investors think the bill could rise substantially as a result of additional lawsuits and regulatory penalties.

CEO Mathias Müller told shareholders the company had drawn the right lessons from its scandal. Workflow processes had been optimized, he said, with a view to increasing technology checks. He also made a point of saying that emissions tests would in future be carried out exclusively by independent firms not belonging to VW.

Only a day before the annual meeting in Hanover, Germany's financial watchdog, Bafin, called on prosecutors to investigate Volkswagen's entire former board over the time it took to disclose the carmaker's cheating practices. It said it could not rule out that management had deliberately misinformed the market in order to manipulate the share price at the time.

The Bafin complaint came as a blow to VW Chairman Hans Dieter Pötsch and CEO Matthias Müller, who were both members of the board as finance chief and head of the Porsche brand respectively when the emissions scandal broke.

German prosecutors have launched an investigation into former VW CEO Martin Winterkorn and brand chief Herbert Diess. They stand accused of withholding information about the Dieselgate scandal from shareholders. (20.06.2016)

VW shareholders have grown frustrated with the state of the internal investigation into the emissions cheating scandal. Some are set to call for a new court-ordered probe at next week's shareholders meeting. (18.06.2016)