The supervisory board of German carmaker Volkswagen named Porsche head Matthias Müller the company's chief executive. He takes over while VW struggles with an emissions test scandal. 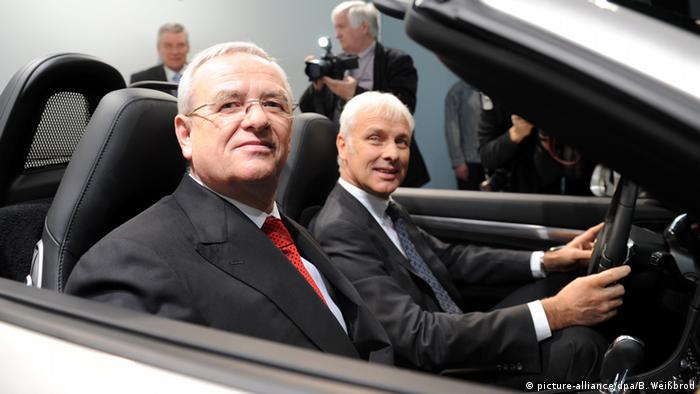 The supervisory board of German carmaker Volkswagen announced on Friday that Porsche head Matthias Müller (behind the wheel in the photo) would take over as the company's new chief executive.

Müller, 62, takes the wheel from Martin Winterkorn (in the passenger seat), who resigned on Wednesday, taking responsibility for the scandal that has plunged the automaker into its biggest crisis in the company's 78-year history.

The crisis was set off by Volkswagen's admission that it developed software for its diesel automobiles to cheat on emissions tests in the United States. The scandal then spread as European nations and Australia, among other countries, said they would launch probes into the diesel engines involved.

Supervisory board chief Berthold Huber said Müller would take over with immediate effect.

Müller's appointment is expected to pave the way for sweeping changes in the management of the company's 12 brands in the wake of the scandal, which could cost the group more than $18 billion (16 billion euros) in fines in the US alone.

The new CEO said Friday his main priority was to win back trust that had been lost among consumers.

"Under my leadership, Volkswagen will do all it can to develop and implement the strictest compliance and governance standards in the whole industry," Müller said in a statement.

VW's supervisory board also announced that Skoda chief Winfried Vahland would head the company's new North America business to cater for the US, Canadian and Mexican markets. It added that Volkswagen's regional head for the US market, Michael Horn, would keep his post despite the emissions test scandal.