Voter fatigue and dreams of Europe frame Moldovan elections | Europe| News and current affairs from around the continent | DW | 27.11.2010

Moldovans are due to elect a new parliament on Sunday. However, disillusionment with politics and voter apathy is on the increase. And it's unclear how much the Europe Union figures in the country's future. 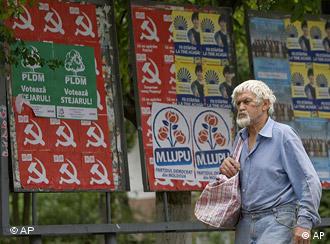 Moldovans are voting for the third time in 18 months

The main street of the Moldovan capital, Chisinau, is choked with traffic - luxury cars drive alongside old-fashioned trams and overcrowded taxi buses. People are on their way home or to the shops or the park with their children, while youngsters sit on benches fixated on their laptops.

The capital shows little sign of the upcoming parliamentary elections. People are preoccupied with the difficulties of their daily lives, such as prices hikes and low pensions.

"I expect nothing, there's fraud everywhere anyway," said one elderly woman on the street. 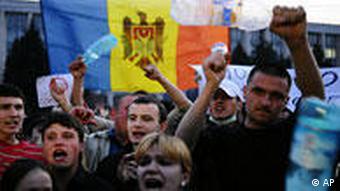 There were protests after elections in 2009 were rigged

Another woman calls for "higher wages and a better pension, a reasonable existence."

Many people say they just want stability and some economic progress. The mood fluctuates between resignation and hope.

The political outcome of Sunday's election is hard to predict. Both the opposition communists and the government coalition of four liberal-democratic parties look like potential victors.

Support for the communists, led by former president Vladimir Voronin, is still high, probably in part due to the fact the governing coalition did not fulfill all it promised.

In a year and a half, voters in Moldova have been called to the polls three times. In April 2009, a rigged election caused serious turmoil, and the communists had to hand over power to an alliance of four former opposition parties. 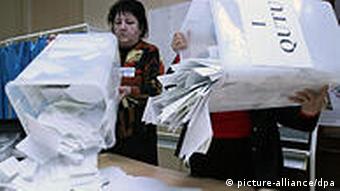 The elections are not at the forefront of most people's minds

The country still doesn't have a president. In September a referendum over whether to directly elect a president failed to attract a large enough turnout.

"I think part of the population does not yet understand what an important democratic device elections are," said EU ambassador Dirk Schuebel. "Each individual has the opportunity to choose their own candidate, their party and take an active part in the democratic process."

Europe is open and ready for further cooperation with Moldova. However, this small country also needs to reform itself from the inside - by fighting corruption, reforming the judiciary and its bloated public administration.

A reliance on handouts?

Literary scholar Christina Grossu, who teaches German at the University of Chisinau, said a drastic change in mentality in the country would do it good. 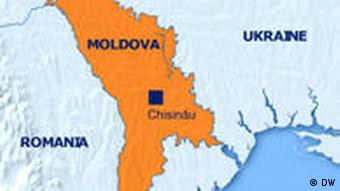 "Most people live with the thought that the state owes them something. So long as it is expected that someone else will solve their problems, nothing will change," she said.

As a university lecturer, Grossu brings home 200 euros ($266) a month - too little to support a family. Like many of her colleagues, she supports herself with part-time work, such as giving language lessons or interpreting. A school teacher's wage is even lower. Hospital doctors earn around 250 euros a month in Moldova.

The low wages have led to a massive "brain-drain" as the best and brightest young professionals leave to seek opportunities elsewhere in Europe.

The trade in counterfeit passports has blossomed; those who can pay two or three thousand euros can buy their ticket to the West. Hundreds of thousands have already fled illegally to the West - and regularly send money back to their families in Moldova.

Some say the country has developed an unhealthy dependence on those remittances.

For young people, the chance to live in western Europe is a dream. Nearly all of Christina Grossu's students have just one goal - a scholarship or the chance of work in Germany.

"For them, Germany is the personification of wealth and prosperity. That you need to work hard doesn't cross their minds as they only know Germany from television and movies. For them, it's a dream." 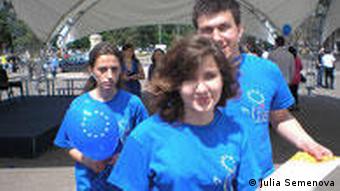 Many young Moldovans hope their country will join the EU

Marian is a young journalist who hopes his country will one day join the EU. He expects that to translate into "a better economy, progress in education and training, cultural momentum and better professional development."

Yet others feel that, as well as opportunities, Europe also offers uncertainty about Moldova's future. Another young journalist, Natalia, fears that opening up Moldova's borders means even more young people will flee the country.

"If they see how it is in Europe, they will go where it's better. Frankly, I've toyed with the idea myself," she said.

Still lots to be done

EU ambassador Schuebel points out that despite progress Moldova has made, its EU dream is still a long way from becoming reality.

"There is still much, much more work to be done," Schuebel said. "The border-control system, security controls, domestic security, document security such as biometric passports, all are important questions that need to be resolved before we can consider loosening visa restrictions."

Despite the hurdles, for many the vision of joining Europe is undiminished.

Just where is Bessarabia, and what does it have to do with Germany? An exhibition curated by a Berlin historian looks at German communities once based in Moldova that got swept away in the chaos of World War II. (04.11.2010)

Moldovans stayed away from the polls in a referendum on whether the voters should elect their president directly. The low turnout has dashed hopes of a resolution to the political deadlock in the country. (06.09.2010)

A large haul of radioactive uranium, thought to be worth around nine million euros, has been confiscated by authorities in Moldova. The suspected smugglers include former police officers. (24.08.2010)