Kenya’s presidential frontrunner Uhuru Kenyatta is currently leading the race for the top position. As vote counting enters a fourth day on Friday, allegations of vote rigging are being made by both sides. 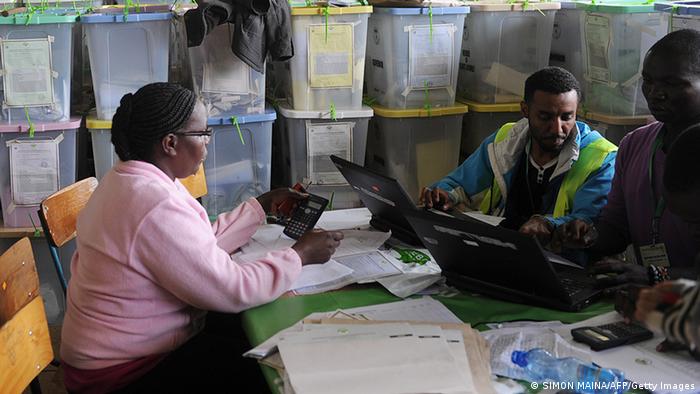 With Kenyatta closing in on the threshold needed to avoid a run-off election, the vote counting process has been marred by allegations from both sides of vote rigging. However, election officials said they are determined to announce the results by the end of the day Friday.

"We are dedicated and determined that this process must end today," James Oswago, chief executive of the Independent Electoral and Boundaries Commission, told a news conference.

Kenyatta's party voiced concerns over the drawn-out vote count, complaining that the inclusion of spoiled ballots in the overall tally could lead to a second round of voting.

Odinga's side strongly challenged the process on Thursday, saying counting should be halted because it lacked integrity. It added claims that some of the ballots had been "doctored."

Kenya's electoral commission has dismissed both sides' claims. The nation is still scarred by memories of the 2007 post election violence in which more than 1,000 people died.

Despite delays and technical glitches, international election observers said the vote and counting processes were transparent.

"I have seen nothing to indicate that the election is not credible," one international observer told the Reuters news agency.

Kenyans in suspense over poll outcome

In the Kenyan elections, computer glitches, spoiled ballots and delayed results are testing the patience of millions of voters. One official says the final figures could be announced on Friday. (06.03.2013)

Issack Hassan, chairman of the Independent Electoral and Boundaries Commission, said the vote would continue, and the preliminary results were genuine.

The European Union's ambassador to Kenya, Lodewijk Briet, agreed with the commission's statement, saying vote counting appeared to be sound and should be allowed to carry on.

"As Chairman Hassan has just said, it should not be stopped midway. It should continue. If people have a problem with the integrity, the legal disputes settlement mechanism exist and should be followed," Briet told Reuters.

Kenyatta is due to face a trial in The Hague for crimes against humanity linked to the violent post-election bloodshed that hit the country at the last election in 2007.

The United States and other Western nations which donate large amounts of money to Kenya see the country as a vital partner in the regional battle with militant Islam. All have voiced concern that a victory for Kenyatta would complicate diplomatic ties with the country.

Election officials estimate more than 70-percent of Kenya's 14.3 million voters turned out to cast their vote at the start of the week.

The commission has until Monday to release the official results.