India has begun tallying the ballots from its five-week-long general elections. More than 500 million people voted in the world's largest exercise in democracy. 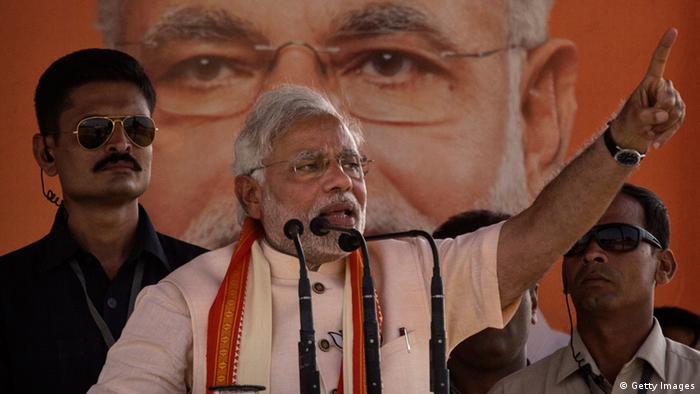 India's Election Commission began counting the votes on Friday morning, with the results expected to be announced later in the day. A record 66 percent of registered voters cast their ballots, compared to 58 percent in 2009.

According to surveys, Hindu nationalist Narendra Modi (pictured) is poised to carry the conservative Bharatiya Janata Party (BJP) to its best election result ever.

Exit polls by six major Indian TV stations predicted that a BJP-led coalition would take between 249-248 seats. The lower house of parliament has a total of 543 seats, with 272 needed to form a government.

But polls have been an unreliable indicator in past elections. In 2004, BJP was tipped to win, but the center-left Indian National Congress party ultimately triumphed.

Modi, 63, is the son of a low-caste tea seller. He campaigned on a promise to breathe life into India's flagging economy, winning supporters in the business community.

Formerly the chief minister of the western Gujarat state, he has also built a following among the urban middle class and the poor.

"I've been to Gujarat and I saw good roads, good infrastructure and good hotels - it was quite like America," Ajit Singh, a wrestling coach, told the AFP news agency in New Delhi.

But Modi has a checkered past. While leading Gujarat, religious riots broke out in 2002 that left at least 1,000 people dead, most of them Muslims.

His opponent is Rahul Gandhi, the 43-year-old Cambridge-educated candidate for the Congress party. Rahul has been criticized for being aloof and failing to stage an effective media campaign.