German carmaker Volkswagen has said it wants a hall named after the company to be rechristened for a party conference by the far-right Alternative for Germany party. It also wants its company logo to be covered up. 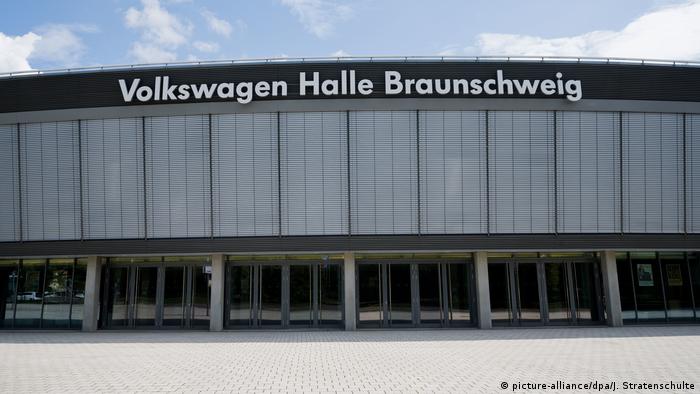 The German auto giant Volkswagen on Wednesday urged the owners of the Volkswagen event hall in Braunschweig to cover up its company name during the November party conference of the Alternative for Germany (AfD).

A spokesman for the company — which doesn't own the hall but holds the naming rights to it — said it had asked the venue's operating company to cover its logo.

The firm said it wanted to adhere to the demands of employees who didn't want the firm associated with the event.

"This party clearly stands against values of our group, such as respect, diversity, tolerance and partnership," Lossie said.

"We won't tolerate an AfD meeting in a hall that is visible as the 'Volkswagen Hall,'" Lossie added. "The name will have to vanish from the scene for the duration of the meeting."

The operator of the hall  — a subsidiary of the city administration — said that, as a public company, it was obliged to allow any political party to rent the venue provided it had not been banned.

"We don't have to like it in every case, but we have to be professional," the operator's chief executive Stephan Lemke told the city's Braunschweiger Zeitung daily newspaper.

Lemke did not say whether the company would comply with Volkswagen's request, saying the situation would have to be checked.

The venue, which opened in 2000, is a multi-purpose arena that serves home to the city's basketball team, which has Volkswagen Financial Services as its main sponsor.

The anti-immigration, anti-Islam AfD made strong gains in some parts of Germany in May's European elections, and is polling strongly in Saxony and Brandenburg ahead of state elections there in September.