Volkswagen Chief Executive Martin Winterkorn has stepped down as a result of revelations last week that the German carmaker had manipulated diesel car emission tests in the US. No successor has yet been named. 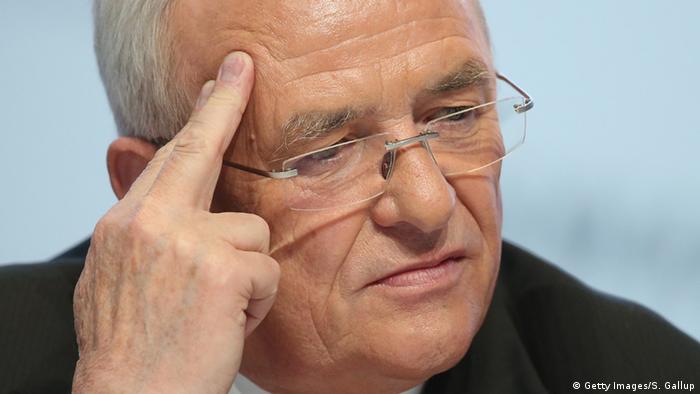 Martin Winterkorn's resignation came after a protracted meeting of VW's presidium of major shareholders ahead of a regular supervisory board meeting on Friday.

The 68-year-old executive said he was stepping down "in the interests of the company" as it grappled with the aftermath of the falsified emissions tests scandal that had rocked the German carmaker.

He said in a statement that "Volkswagen needs a fresh start, also in terms of personnel," adding that he would clear the way for this fresh start with his resignation.

"I'm shocked by the events of the past few days, "Winterkorn said. "Above all, I'm stunned that misconduct on such a scale was possible in the Volkswagen Group."

Successor to be named on Friday?

Supervisory board chief Berthold Huber told reporters in Wolfsburg that no decision had yet been reached on Winterkorn's successor, adding that more details would be announced after the board's meeting on Friday.

Huber emphasized that Winterkorn had had no knowledge personally of the emission test manipulations in the US, but said he respected his move to take responsibility for the scandal. Given Winterkorn's engineering background, observers had doubted that he could be unaware of the use of so-called "defeat devices."

German Economics Minister Sigmar Gabriel said Wednesday he was confident the Volkswagen Group would do all it could to quickly clear up the scandal, adding that he respected Winterkorn's decision to resign while emphasizing that the latter's achievements for the company were indisputable.

Winterkorn - until now the highest-paid CEO among the heads of companies listed in Germany's DAX-30 blue-chip index and with it the best-paid executive in Germany - had been at the helm of VW since 2007. He clocked up a record profit of 11 billion euros ($12 billion) and sales of 202 billion euros in 2014.

US authorities are planning criminal investigations after discovering that VW programmed computers in its cars to detect when they were being tested and alter the running of diesel engines to conceal the true level of emissions.

Wolfsburg is Volkswagen, VW is Wolfsburg

In a world without Winterkorn, Volkswagen workers fear for the future of the company and their jobs as they wonder about the impact of the emission tests scandal. DW's Janelle Dumalaon reports from Wolfsburg. (23.09.2015)

Volkswagen’s massive emissions cheating scandal will likely stain the reputation of Germany’s largest automaker. But it is unlikely to tarnish Germany’s stellar image in the world – unless one thing happens. (23.09.2015)