German engineering company Voith has dismissed media reports it has struck a deal with Chinese investor Midea to sell its majority stake in robotics firm Kuka, but didn't rule out that a sale was at all possible. 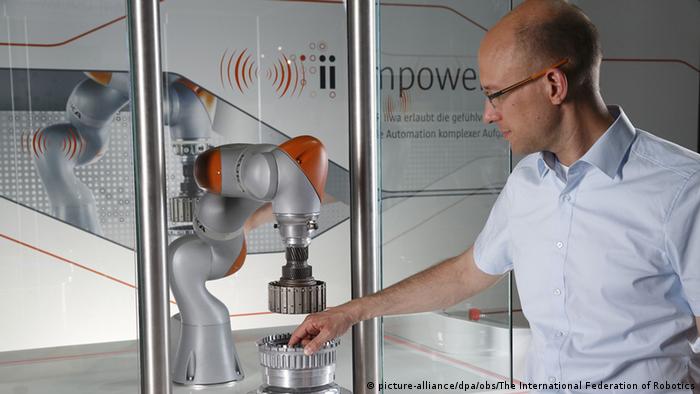 German mechanical engineering company Voith was reported Thursday to have expressed willingness to sell its stake in German robot manufacturer Kuka to Chinese household appliance firm Midea, according to a report by the business publication "Manager Magazin".

But a Voith spokesperson later denied the report, while keeping open the possibility of such a deal. "There has been neither a preliminary nor a shareholder's decision on selling the shares," the spokesperson said.

News agency Reuters reports that it had earlier gotten two insider accounts saying that Voith intended to sell its holdings in Kuka. Voith is the largest shareholder in Kuka, with a 25.1 percent share. Midea already owns a 13 percent share itself, and the company has said it is aiming to acquire at least 30 percent.

Midea reportedly offered 115 euros per share, which could bring the capital-hungry Voith almost 1.15 billion euros. Kuka stocks reached 106.9 euros per share on Thursday, up from around 50 euros at the end of 2014.

The report said that Voith agreed to the sale last week. Insiders say that the Voith chief Huber Leinhard was in Hong Kong last week to meet with Midea leadership and smooth out disagreements.

Leinhard previously criticized Kuka leadership for being too zealous in accomodating Midea's intentions for a buy-out.

It would be the highest profile and most sensitive purchase in a growing list of Chinese takeovers of German firms.

Kuka, based in the German city of Augsburg, is a leading manufacturer of industrial robots and also offers automated systems for manufacturing, including for Germany's all-important automobile industry.

There is a fear of what may happen if such technology ends in the hands of Chinese investors, who are driven in part by the Chinese government as it looks to offset slowing domestic growth with a transition to more high-tech manufacturing.

Some German politicians, including German Economics Minister Sigmar Gabriel, even expressed hope that a European investor would step up instead.

During a visit last week to Beijing, Chancellor Angela Merkel said that Berlin was seeking for a solution that would "satisfy both sides." Reports from within Germany's ruling coalition say that an understanding has been reached with the Chinese investors to limit its share in Kuka to 49 percent.

Midea, for its part, has said that it isn't seeking "domination" over the robotics firm. China's foreign ministry warned against politicizing such deals.