Protests have erupted in several cities in Belarus after a presidential vote that the opposition says was rigged. An exit poll showed longtime ruler Alexander Lukashenko was on path to claim a sixth consecutive term. 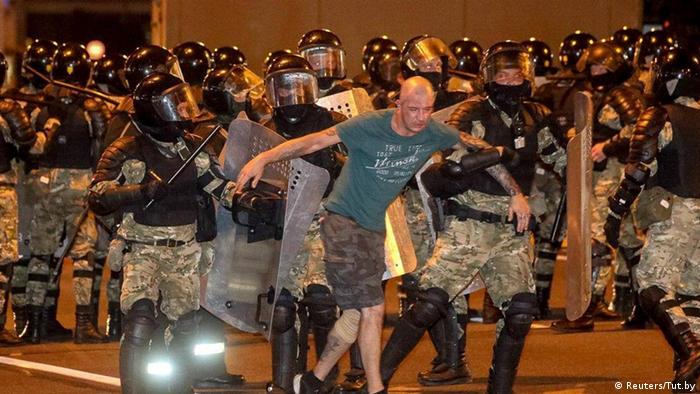 Mass protests broke out in major cities across Belarus on Sunday night as authorities said longtime President Alexander Lukashenko was on course to secure a sixth consecutive term following an election that the opposition said was rigged.

At least one person was killed after being knocked over by a police prisoner van and dozens were injured in the police response to protests, Valentin Stefanovic, of the Viasna human rights group, told the Reuters news agency.

"There are at least 120 detainees, but this is initial data," Stefanovic said.

Witnesses described chaotic scenes across the capital, Minsk, with protesters shouting, cars honking and sirens wailing. Several thousand protesters gathered near a central monument in Minsk, where they faced off with hundreds of riot police carrying shields.

Interior Ministry spokeswoman Olga Chemodanova said that police efforts to restore order were continuing overnight, but wouldn't say how many people were detained. 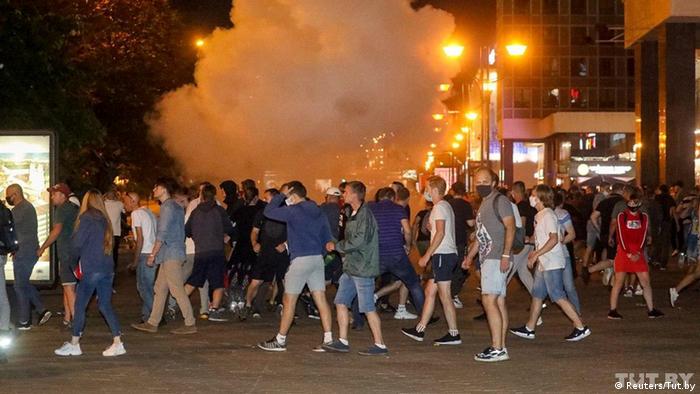 Viasna's Ales Bilyatsky told The Associated Press that several hundred were detained and hundreds injured in the police crackdown. Bilyatsky also accused police of using excessive force against the protesters.

The protests began after an official exit poll showed that Lukashenko won Sunday's presidential election with 79.7% of the vote, securing a sixth term in office.

Lukashenko's main opposition challenger, Svetlana Tikhanovskaya, came second with 6.8%, according to the poll. She swiftly said she did not trust the official figures, insisting "the majority is with us."

Tikhanovskaya, a former English teacher, entered the race after her husband, an anti-government blogger who intended to run, was jailed. Her rallies have drawn some of the biggest crowds since the fall of the Soviet Union in 1991.

"I hope that law enforcement officials will come to their senses and switch to the people's side, then the night in Minsk will end without blood," said Veronika Tsepkalo, the wife of a barred candidate who threw her support behind Tikhanovskaya.

But senior Russian lawmaker Leonid Slutsky, chairman of the State Duma's Committee on International Affairs, warned against a "bloody" revolution similar to the 2014 Maidan unrest in Ukraine which ousted pro-Russian president Viktor Yanukovich.

He said that "Belarusians are quite capable of deciding who their president is, foreign powers should not be allowed to interfere and influence the situation in the country." 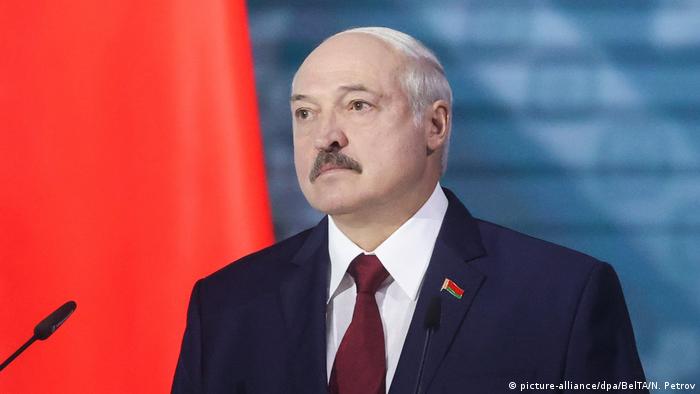 Lukashenko has ruled Belarus with an iron fist since 1994

Ruling with an iron fist

Lukashenko, dubbed by critics as "Europe's last dictator," has ruled Belarus with an iron fist since 1994. He presents himself as a guarantor of stability but has struggled in recent times as anger mounts over his handling of the COVID-19 pandemic, the economy and his human rights record.

Human rights groups say more than 1,300 people were detained in the crackdown ahead of the election, including independent election observers and members of Tikhanovskaya's campaign team.

A harsh response to new protests could hurt Lukashenko's attempts to mend fences with the West amid fraying ties with traditional ally Russia, which has tried to press Belarus into a closer economic and political union.