Vietnam′s labor rights make two steps forward, one step back | Asia| An in-depth look at news from across the continent | DW | 22.02.2021

The EU-Vietnam Free Trade Agreement (EVFTA) is beneficial for both Hanoi and Brussels, but is Vietnam keeping its end of the bargain on labor rights? 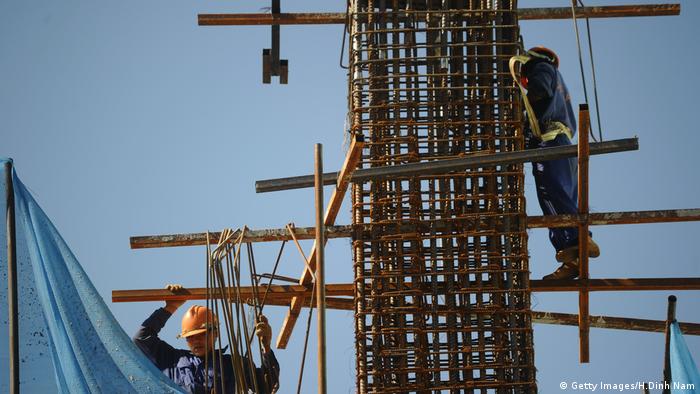 There was more than one reason for the European Union to celebrate ratification of its free trade agreement with Vietnam last year. Aside from boosting trade links with one of the world's fastest growing economies, the EU-Vietnam Free Trade Agreement (EVFTA) also committed Vietnam's ruling Communist Party to significant progress in labor rights.

Central to these reforms are the creation of workers representative organizations (WROs), independent groups in which employees can for the first time petition their employers without interference from the communist authorities.

Vietnam's reformed Labor Code that permits WROs came into effect on January 1, whilst the Southeast Asian country has signed up to a number of International Labor Organization (ILO) conventions, including No. 98 on the "Right to Organize and Collective Bargaining."

Yet optimism is fading as Vietnamese authorities have delayed introducing key reforms, including legislation to determine how WROs can be created, while analysts worry that Hanoi's apparent commitment to reform has waned since the trade pact was ratified last August.

"The EVFTA became a 'fill in the blank' exercise, with a few ILO ratifications off in the distance and whatever mechanism Vietnam dreamed up," Phil Robertson, deputy director of Human Rights Watch's Asia Division, told DW.

"The problem is the European Commission didn't want to drive a hard bargain, and the EU Parliament failed at the end to make the bureaucrats do better," he added.

Several EU statements still refer to EVFTA as helping to create "trade unions" in Vietnam, but WROs are different in many ways. They are only allowed to collectively bargain and organize strikes at the individual enterprise level, meaning they are restricted to individual companies.

Unlike trade unions, they are unable to form sectoral or regional federations to represent the interests of workers from different companies.

This reduces their bargaining abilities to create equal working conditions across sectors of the economy. Worse, it injects competition between workers of different companies.

The employees of one firm may be able to strike for better rights that are denied to workers of a similar business, said two Vietnamese labor activists, who asked to remain anonymous out of safety concerns.

For them, the creation of WROs could be a step backward in terms of labor rights, creating a "false image" of progress. Because WROs will have to remain small, they will be easily harassed by the authorities and employer groups.

And the complicated system of how WROs are regulated by the government, which still hasn't been promulgated, will mean the authorities can easily disbar the groups if they grow too forceful, while key labor activists will be banned from participating in them from the outset.

'The start of a process'

Despite communist repression, several independent (and therefore illegal) trade unions have been created over the years, although almost all were swiftly shut down by the authorities and their leaders arrested and jailed.

According to estimates by the 88Project, which monitors political prisoners in Vietnam, there are currently 259 activists in prison and another 229 at risk.

Joe Buckley, a specialist in Southeast Asian labor rights, told DW that "one of the potential positive impacts is that the reforms act as an impetus for the state-led union, the VGCL, to try and become more representative of workers."

On the other hand, Buckley added, it could also stymie the action of wildcat strikes — "the single most important factor in improving workers' wages and conditions," he said — and make collective bargaining less independent than it was previously.

Wildcat strikes have generally been tolerated by the communist authorities as they limit demands for independent trade unions.

A study published in 2017 by BetterWork, a joint ILO and World Bank intuitive, estimated that at least 20% of firms in Vietnam's sprawling apparel manufacturing sector, which are usually foreign-owned, have seen wildcat strikes in recent years, making it one of the highest strike rates in the world, the study asserted.

"I don't think anybody would have said that the proposals that were on the table were going to create a trade union paradise," said Judith Kirton-Darling, a former member of the European Parliament (MEP) who served as a shadow rapporteur for the trade deal.

"MEPs weren't naïve; they knew who they were dealing with, that it was a one-party state," she told DW. "In the months before, and at the time of the ratification, it was a judgement call by MEPs whether the commitments made by the Vietnamese government, which were more substantive than the EU had had from other partner governments, were enough."

She describes it as a glass half-full or half-empty decision. "There were some MEPs who would have voted for the EVFTA without any commitments at all." However, Kirton-Darling stresses the Vietnamese government's roadmap laid out to the European politicians was substantial and that many saw it as the start of a process, not the end.

A good deal for Hanoi and Brussels

For Hanoi, ratification of a free-trade agreement with the EU was of major political importance, a way of diversifying its trade links away from China, its largest trading partner but also a key threat as both countries clash over disputed territory in the South China Sea.

For the EU, the trade pact was a means of building up its influence in Southeast Asia, after Brussels and Singapore had agreed a free trade deal in 2019. Last December the EU was finally named a "strategic partner" of the Association of Southeast Asian Nations (ASEAN) bloc.

But EVFTA negotiations were marred by controversies within Brussels. Jan Zahradil, MEP and vice chairman of the European Parliament's international trade committee, was forced to resign as rapporteur for the EVFTA in December 2019 after he was revealed to be a member of a Vietnam-European friendship group with links to the Vietnamese Communist Party.

Dozens of Vietnamese civil society groups wrote to the European Parliament before its final vote on the trade pact in February 2020, calling on it to delay proceedings until Hanoi passed a number of key reforms, rather than merely pledging to do so. The arrest of Pham Chi Dung, a famed independent journalist, just months ahead of the vote also muddied the waters over how committed Hanoi was to progressive change.

Kirton-Darling says that she felt Vietnam's acceptance of progress in labor rights was a way of avoiding the bigger issue of human rights, while the European Commission "didn't engage concretely to say how they will be following up this roadmap to make sure [Vietnam's] commitments were followed in the time frame they were laid out."

Indeed, the reformed Labor Code that allows WROs to operate came into effect on January 1, yet legislation to determine how WROs can register and are regulated hasn't yet been passed, even though it was supposed to be implemented by the end of 2020. "So, in practice WROs cannot operate," said Buckley.

Robertson of Human Rights Watch believes that Vietnam will now "run rings around the EU on these labor issues, undermining any sort of meaningful change that leads to real independent worker empowerment."

"What's so aggravating and sad is the lost opportunity here is substantial, and Vietnamese workers will pay the price for this failure," he added.

According to EU Commission sources, "the Commission is closely monitoring progress under each commitment that Vietnam has taken on labor rights, and the role assigned by the Free Trade Agreement on civil society."

They added that the EU's executive is also closely observing the adoption of the necessary implementing decrees that will allow WROs to operate.

A large part of this task will fall on Kirton-Darling, who was recently named chair of the EU's Domestic Advisory Group on the EVFTA, which will meet for the first time on March 8. "We will be scrutinizing delays in the timetable, how the change in the labor law actually plays out on the ground," she said.

"We were never expecting independent trade unions to mushroom," she added, "but we will be watching very carefully how Vietnamese authorities deal with independent worker bodies and the climate around application" of other ILO conventions.