Vietnam uses ecological engineering to save rice | Environment | All topics from climate change to conservation | DW | 21.04.2014

Inside 30 years Vietnam has gone from importing rice to becoming the world’s second largest rice exporter. Over-use of pesticides is damaging the environment, but farmers in the Mekong Delta say they've found a solution. 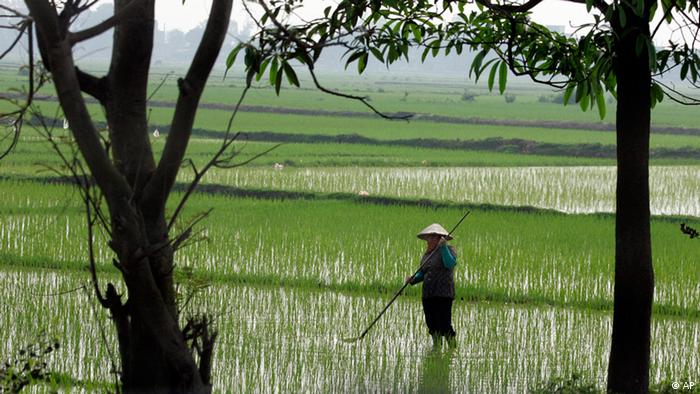 There is a hint of gold in the verdant rice fields that fill the horizon in Kien Giang province - a sign for the farmers here in the southwest of Vietnam’s Mekong Delta that harvesting time is not far away. But along the paths between the paddies, known as bunds, there are also neat rows of speckled color - yellow, orange and purple nectar flowers - that are not part of the typical pastoral scene here.

The floral borders are not for decoration though. They are part of an ecological engineering project aimed at encouraging the natural predators of harmful pests and thereby reducing the use of pesticides. In particular, the project targets the brown planthopper, a winged insect which devastates rice crops across Asia by sucking the sap until the plants shrivel and die, causing discolored patches on the field known as hopper burn.

Nguyen Van Ray, a leathery-faced man in his 70s, and his wife Nguyen Thi Hai, grow just under half a hectare of rice in Trung Hoa village. Although they still use fungicide, the couple don’t spray pesticides any more.

"Before the project we used pesticides every week, 40 days after sowing we used the pesticide many times," Ray says. "We applied it every week by hand. We would irrigate the fields then spray the pesticide at the base of the plant."

It’s not surprising. The couple have bitter experience of brown planthoppers, they say. 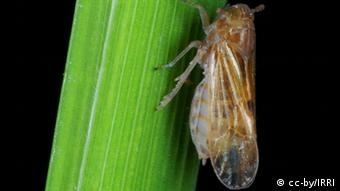 Ray and Hai are among 45 families in Kien Giang province who have taken part in the ecological engineering project since 2011, run by the Southern Regional Plant Protection Centre and the International Rice Research Institute.

The concept was introduced in rice farming in China in 2008, and later on in Vietnam and Thailand. More recently, the Philippines also launched a project.

To kick-start the process rice farmers are initially given seedlings, which they plant on the bund and irrigate together with the rice plants. Although many of the nectar flowers die during the dry season, enough survive and go to seed for the next rice growing cycle.

When the flowers are in bloom, a planthopper predator – like the tiny parasitoid wasp for instance – then lives off the pollen and honey from the flowering plant. After living in the nectar flower on the bund, they fly to find the insect nest and then lay their eggs inside the eggs of the insect nest. Soon after that, the insect numbers generally die off.

So far, thanks to a publicity campaign involving billboards, leaflets and even a television series, more than 7,800 farmers now practice ecological engineering in Vietnam with demonstration sites being carried out in four provinces. According to the Southern Regional Plant Protection Centre, these farmers have "significantly reduced" pesticide use and no brown planthopper outbreaks have been reported from these sites since the project began. 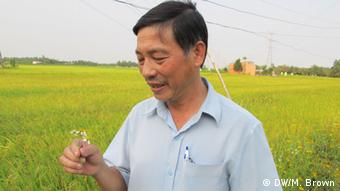 When rice is big business

Following institutional and economic reforms in the 1980s, Vietnam has recently evolved from being a chronic rice importer to become the world’s second biggest rice exporter, after India. The Mekong Delta region produces around half of the country’s rice.

Like other countries in Asia, pesticide use has skyrocketed in recent decades too, propelled by aggressive marketing. Le Quang Cuong from the Southern Regional Plant Protection Centre, says that often when they are introducing farmers to the ecological engineering project in one village, in a neighboring village pesticide companies would be meeting residents to sell their products.

But, slowly the project is taking effect nonetheless. One reason farmers are moving away from pesticides and towards flowering plants is due to the cost benefits. Using pesticides costs about 800,000 dong (27.30 euros, $18.80) per hectare per season. Buying the seeds for the right flowers comes in at just a fraction of that price. 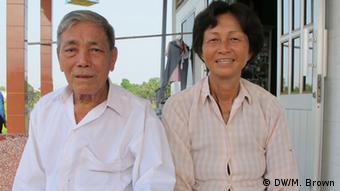 "The pesticide usage level in vegetable growing is much higher than in rice production," he told DW. "They spray once every three or four days."

Farmer Huynh Ngoc Dien, one of the vegetable farmers taking part in the pilot stage of the ecological engineering project, says he’s reduced the amount of pesticide he sprays by 20 percent.

"When I grow nectar flowers I am not worried, but some people in our village still spray pesticides, people inside and outside the project," he says. "It’s still the first time for them so they don’t know the benefits they can get if they just opt for flowers."

Iron deficiency is a health problem that hits developing countries especially hard. But a small iron fish developed in Cambodia could be a powerful new tool in the global fight against anemia. (15.04.2014)

Listen to the report from Vietnam here