Two women identifying themselves as Italian aid workers taken hostage in Syria have appeared in an online video. One of the women urges their government to seek their release, and says they are in danger of being killed. 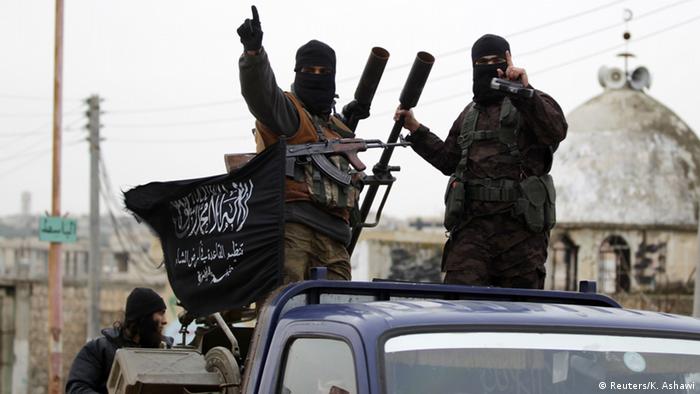 Several Westerners have been taken hostage by Nusra Front

The video, which appeared on YouTube late Wednesday, shows two young women seated before a blank wall, dressed in black robes. One of them holds a sign with the date December 17, 2014, although the video only appears to have been posted on December 31.

The other woman appears to be reading from a prepared statement:

She identifies herself and her colleague as Vanessa Marzullo and Greta Ramelli who were abducted by gunmen in northern Aleppo province in August.

The 23-second appeal does not include information about which group is holding the pair, but the video's Arabic title translates to "Nusra Front detains two Italian employees because of their government's participation in the coalition against it." Nusra Front is a wing of al Qaeda operating in Syria.

It's unclear whether the video is authentic. It was not posted on any other official accounts belonging to Nusra Front, such as their Twitter page, nor does it feature the group's flag as their previous hostage videos have done.

In August, Italy's Foreign Ministry said two Italian aid workers involved in humanitarian projects in Aleppo had been kidnapped, but did not give their names. The government also said it was working to secure their release, without providing information about who they believed was behind the kidnapping.

Nusra Front and terror group "Islamic State" (IS) have taken several Westerners hostage in Syria during the civil war, which began in March 2011. Thousands of Syrians have gone missing and more than 200,000 have been killed during the course of the conflict.

A group of nuns held by Syrian rebels since December has been set free. The Greek Orthodox nuns were released as part of a rare prisoner exchange deal between the rebels and Syria's government. (10.03.2014)