Victory for conservatives across Europe in EU elections

The conservative European People's Party has won a majority of the seats in the European Parliament. But right-wing and euroskeptic parties have made significant gains, sending shock waves through Western Europe. 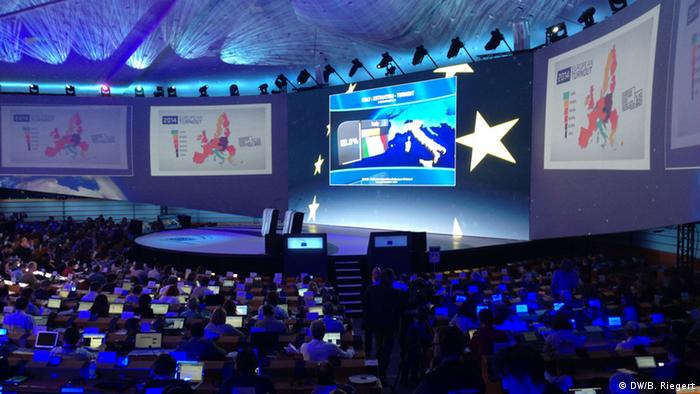 According to official estimates published by European Parliament, center-right parties have won 211 of the total 751 seats. The EPP top candidate, Jean-Claude Juncker, immediately claimed the right to head the executive European Commission.

The socialists are in second place with 193 seats, liberals third, followed by the Greens and the far left. Euroskeptc parties are seen as winning a total of 129 seats.

Early results out of Greece had the country's anti-austerity radical leftist party Syriza leading the polls with the radical right "Golden Dawn" party winning around 9 to 10 percent.

In Austria, too, the far-right FPÖ saw strong gains at 20 percent, compared to the 7.3 percent they garnered in 2009.

Belgium's Flemish nationalist N-VA party made strong gains and in Denmark the anti-immigration Danish People's Party is set to take the biggest share of the Danish vote, while Britain saw a surge in support for Britain's euroskeptic UKIP party, bringing them up to 30 percent.

In the Netherlands, however, Geert Wilders'right-wing Euroskeptic Party for Freedom fell short of expectations, dropping from second to fourth place.

German projections showed Chancellor Angela Merkel's conservative CDU/CSU party leading in the European elections with 36.1 percent of the vote, ahead of their center-left junior coalition partners the SPD at 27.6 percent. The Green party was at 10.9 percent, the Left party at 7.8 percent and the euroskeptic AfD at 6.5 percent - giving the party seats in parliament for the first time.

"It has been a big step forward in European politics that the Social Democrats managed to agree on one single top candidate and the election result in Germany shows that we are on the road to success," he said to the cheers of SPD supporters.

Schulz is now hoping to get enough support in the EU Parliament for his candidature to succeed Jose Manuel Barroso as the head of the EU Commission.

Turnout for the vote was reported at 43.11 percent, similar to the last elections in 2009. Some 48 percent of Germans showed up to the polls on Sunday.

Final results and an exact allotment of parliamentary seats are expected to be announced by the end of Monday.

Europeans from the 28-member block went to the polls over four days in voting that began on Thursday in Britain and the Netherlands.

The gains for euroskeptic and far right parties could lead to changes in EU policy in areas ranging from border control and immigration to the trade and investment agreement being negotiated with the United States.

EU law is subject to constant change. So too, is the distribution of seats in the European Parliament. The number of seats will drop following the May election. DW looks at what will change and what will remain the same. (25.05.2014)