Venezuela's opposition-led assembly has accused President Nicolas Maduro of subverting democracy. The declaration came on the heels of a nixed referendum on removing the unpopular leader from power. 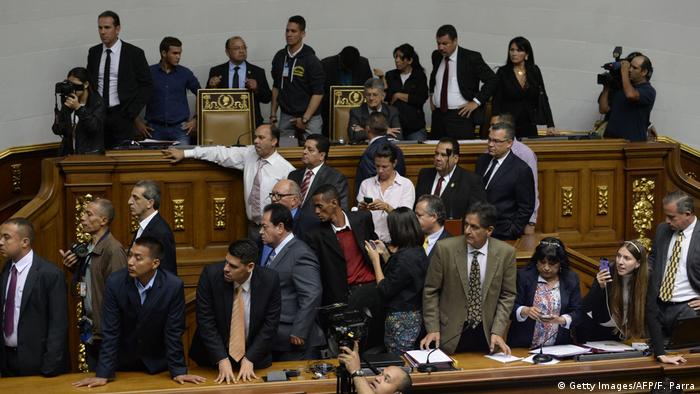 Venezuela's legislature has proclaimed that the administration of President Nicolas Maduro carried out a coup when it blocked an attempt to hold a referendum on removing the unpopular Socialist president from power.

Women were at the forefront of a rally in Caracas to protest the decision to prevent a referendum to remove President Nicolas Maduro. Protests are expected to continue in the National Assembly and on the streets. (23.10.2016)

The referendum on recalling Venezuela's President Nicolas Maduro could be held early next year, the country's election board has announced. The move allows the ruling party to stay in power regardless of the outcome. (22.09.2016)

After calling an emergency meeting of Congress on Sunday, the opposition-run legislature declared a "break of constitutional order and the existence of a coup d'etat committed by the Nicolas Maduro regime," according to French news agency Agence France-Presse. They also promised to respond with mass protests and called on the international community to apply pressure to force the president to resign.

During the rowdy session, the legislature also vowed to put Maduro on trial. This was despite the fact that the country's Supreme Court is known to side with the president in a system that continually undermines the Congress, which is led by the center-right Mesa de la Unidad Democrática (MUD), or Democratic Unity Roundtable.

"It is a political and legal trial against President Nicolas Maduro to see what responsibility he has in the constitutional rupture that has broken democracy, human rights and the future of the country," said MUD leader Julio Borges before the session was interrupted by about 100 apparently pro-government protestors who stormed the chamber chanting "The Assembly will fall!"

"The fact that lawmakers elected by 7.5 million people were silenced by 300 thugs sums up the situation better than any speech could," said MUD spokesman Jesus Torrealba after the protestors were led out of the building.

Discontent with the Maduro government has been mounting as the country sees itself plunging further into economic chaos despite vast oil reserves. However, many Venezuelans are uncomfortable with a referendum against the president as they fear increasing instability and violence, should he be removed from power.

Socialist lawmakers have also accused the opposition of forging signatures in order to pass the referendum motion. They further charge that MUD is trying to get hold of the country's oil for themselves.