Venezuela's government said it has suspended dialogue with the US-backed opposition to protest the extradition of fugitive Alex Saab, a close ally of President Nicolas Maduro, from Cape Verde to the US. 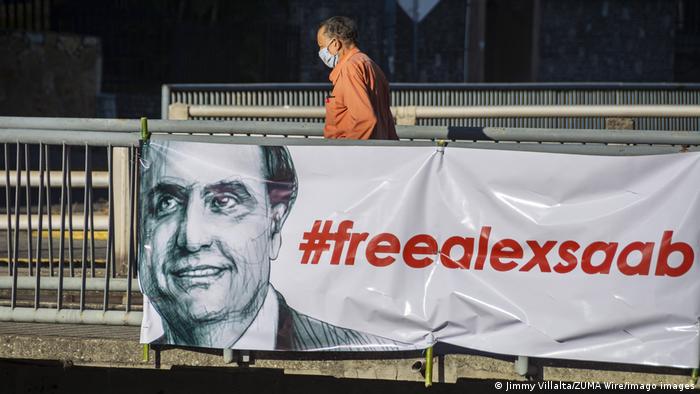 The Venezuelan government announced Saturday that it would suspend negotiations with the opposition that were due to resume this weekend.

The announcement came just hours after Colombian businessman Alex Saab, who has close ties to Venezuela's government, was put on an extradition flight from Cape Verde to the United States.

Saab's extradition to the US, where he faces money laundering charges, seemed to also trigger another retaliatory move from Venezuela.

Six former US oil executives held on house arrest in Venezuela were picked up by security forces, their family members said. They were executives of refiner Citgo, a US subsidiary of state oil company PDVSA.

Washington has repeatedly demanded their release, and Saturday's move is likely to flare up the already rocky relations between Washington and Caracas.

Why was Alex Saab extradited?

Saab, who also has a Venezuelan diplomatic passport, was arrested in Cape Verde 16 months ago on his way to Iran.

The government of Venezuelan President Nicolas Maduro said Saab was on a diplomatic humanitarian mission and should have enjoyed immunity from prosecution.

US prosecutors, however, believe Saab is likely to know details about how Maduro, his family and top aides have garnered millions of dollars in government contracts for food and housing while much of Venezuela's population has been living in poverty.

Saab himself is thought by US authorities to have earned millions by conducting crooked deals on behalf of Maduro's socialist government. Among other things, he and his business partner Alvaro Pulido are charged with operating a network that exploited food aid destined for Venezuela.

In 2019, US federal prosecutors indicted Saab on money laundering charges connected to an alleged bribery scheme that pocketed more than $350 million (around €302 million) from a low-income housing project for Venezuela's government.

Cape Verde's Constitutional Court authorized the extradition last month after a drawn-out court battle with Saab's legal team, who have called the US charges "politically motivated."

Jorge Rodriguez, who heads the government's negotiating team, said his team wouldn't travel to Mexico City for the next scheduled round of talks with the opposition "as a deep expression of our protest against the brutal aggression" against Saab.

Before his arrest, Saab had been appointed as part of the government's negotiating team in the dialogue with the US-backed opposition.

The Norway-brokered talks, which started last August, has aimed to find ways out of Venezuela's economic crisis and political tug-of-war.

How did the opposition respond?

Opposition leader Juan Guaido has condemned the decision to suspend the talks in Mexico.

"With this irresponsible suspension of their assistance in Mexico, they [the Venezuelan government] evade once again urgent attention for the country, which currently suffers from extreme poverty of 76.6%," he said on Twitter.

Guaido said he would continue to insist on finding a solution to the country's crisis.

Meanwhile, Colombian President Ivan Duque took to Twitter to hail Saab's extradition as "a triumph in the fight against drug trafficking, money laundering and corruption by the dictatorship of Nicolas Maduro."

"Colombia has supported and will continue to support the United States in the investigation of the transnational crime network led by Saab," Duque added.