Venezuelan President Nicolas Maduro has responded with defiance at being declared unwelcome at the upcoming Summit of the Americas in Peru. Earlier this week, the Peruvian government said he was not welcome to attend. 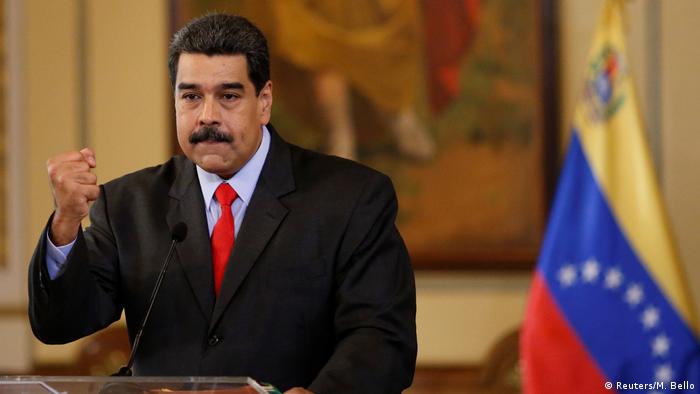 Venezuela's socialist President Nicolas Maduro reacted angrily to the center-right Peruvian government's announcement this week that he would not be welcome to attend the Summit of the Americas in Lima this April 13-14. Maduro claimed the move was a sign of intolerance on the part of right-wing Latin American leaders.

Speaking at Venezuela's presidential palace, Maduro asked: "Do you fear me? You don't want to see me in Lima? You're going to see me. Because come rain or shine, by air, land or sea, I will attend the Summit of the Americas."

Maduro attacked his counterparts, whom he regularly accuses of being part of a US-backed conspiracy designed to take control of Venezuela's massive oil reserves, calling Argentina, Colombia and Peru "the most unpopular governments on the planet." He also personally attacked Peruvian President Pedro Pablo Kuczynski, claiming that "he struggles to speak Spanish."

Maduro has been extremely unpopular in Venezuela and has been accused of gravely worsening the country's economic and humanitarian situation through his mismanagement. After heavy-handed government crackdowns and a devastating economic crisis, Maduro has become increasingly isolated among Latin American leaders as well.

His only allies at this point are Bolivia's Evo Morales, Nicaragua's Daniel Ortega and the Cuban government, which has attested to its "unshakeable solidarity" with the embattled president. After five years of brutal recession, support from foreign lenders China and Russia also appears to be on the wane.

In a bid to cement his power, Maduro also recently announced that the upcoming presidential election would be held on April 22 rather than in December as originally scheduled. The move was made possible by Venezuela's new Constituent Assembly, which is packed with Maduro supporters.

Critics and opposition politicians are barred from running in the election. The decision is also what led Peru to declare that Maduro's "presence will no longer be welcome" in Lima.