It took five minutes for Mike Krzyzewski's Dream Team to find their rhythm in the final of the World Basketball championship against Serbia. After that, there was no looking back as the USA defended their world title. 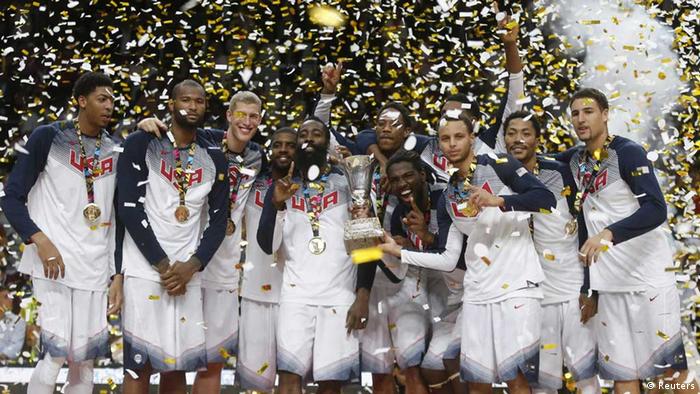 At the FIBA World Championship in Madrid, the defending champions from the USA were clear favorites against a Serbian side that had their work cut out for them.

Serbia started out strong, methodically building a five-point lead in the early minutes of the game thanks to quick, precise passes that found their marks down low. The US defense barely seemed to register the Serbian passing combos in the first few minutes, casually letting the plays unfold and doing little to stop them.

Following a time-out by US coach Mike Krzyzewski after three minutes of play, however, the US flipped a switch that stayed stuck in the on-position for the rest of the game. With Serbia leading 15-7 as the halfway mark in the first quarter approached, James Harden scored and drew a foul to cut the lead to five. Moments later he followed with a three-pointer, and DeMarcus Cousins tied the game at 15 thanks to two free-throws after being fouled by Serbia's Miroslav Raduljica. With the score even, and the US fully awake, they simply sprinted away with the title.

The Americans built that lead to 11 points in the span of a few minutes, went 21 ahead with five minutes to go in the second half, increased the deficit to 30 points by halftime and pushed it to 40 on the first play of the fourth quarter. The final score was 129-92, with the USA winning their fifth FIBA World Championship. 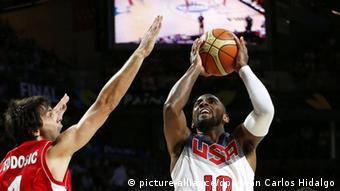 Kyrie Irving top-scored for the US team, with 26 points

Poor shooting from the three-point line by Serbia was countered by strong perimeter shooting from the USA. Many Serbian three-point attempts missed only to be followed by three points at the other end of the court. In the end, Serbia made just 20 percent of its 25 three-point attempts, while the Americans converted half of their 30 shots, led by the hot hand of Kyrie Irving who went six for six from beyond the arc on his way to a team-high 26 points. Harden was the USA's second most prolific scorer, finishing with 23 on the night.

Rebounding was another issue for Serbia, with the Americans grabbing 44 to the Serbians 32. The USA were particularly effective at converting offensive rebounds into points.

Serbia's strong suit was setting up their plays and capitalizing on US turnovers. Milos Teodosic led Serbia in the assists column with seven and was the best on his team at finding holes in the strong American defense. However, even when Teodosic managed to land a pass, Serbia was forced to take poor shots from the field when USA applied pressure in the key.

After the game, US forward Kenneth Faried said that the players had been determined to prove those wrong who had doubted the team before the tournament.

"It kind of was, again, a smack to our face, saying the US was sending the B-team to go play in the World Cup," he said. "Just because LeBron's not here, Kobe's not here, Durant's not here, doesn't mean anything. We can step up and win the gold, too. That's what we did tonight."

US battle past Lithuania to reach FIBA final

The US continued to meet expectations in the 2014 FIBA Basketball World Cup, as they overcame a stubborn Lithuania side 96-68 to reach the final. Their opponents will be decided tomorrow. (11.09.2014)

US basketball team on course for World Cup win

The US continue their march towards the basketball World Cup trophy. Slovenia were eventually brushed aside and a semifinal against Lithuania awaits. (09.09.2014)