More than 300 victims were abused by doctor Larry Nassar, who was jailed in 2017. Victims spoke of the "hellish" five-year court ordeal and therefore "it was in the best interest of everyone to accept this settlement." Hundreds of sexual abuse victims have agreed to a $380 million (€336 million) settlement from USA Gymnastics, the US Olympic and Paralympic Committee (USOPC), and their insurers, lawyers said Monday.

More than 300 victims were abused by Larry Nassar, who was the main doctor for Olympic gymnasts for 18 years.

In 2017, Nassar was given a 60-year prison sentence in a federal court on charges of possessing child sex abuse material. The following year, Nassar was sentenced up to 175 years and up to 125 years, respectively, in two separate Michigan courts for molesting female gymnasts who were under his care. 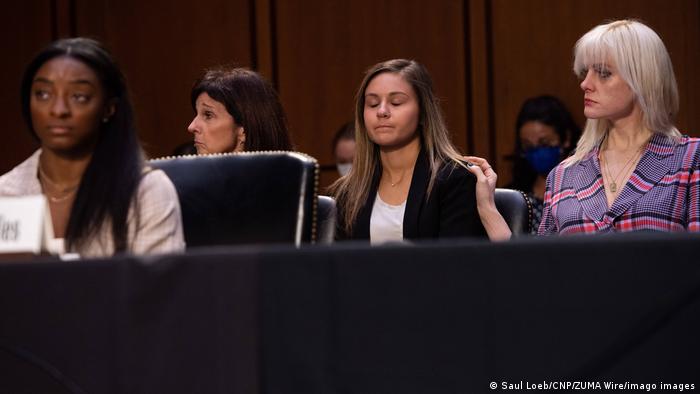 Over 90% of more than 500 victims voted for a payout of $425 million in September to settle a five year trial against the US gymnastics bodies.

The reduced sum of $380 million in damages was conditionally approved by a federal Indianapolis court.

USOPC CEO Sarah Hirshland said she recognized its role in "failing to protect these athletes, and we are sorry for the profound hurt they have endured."

In addition to the financial penalty, USA Gymnastics committed to giving the victims a dedicated seat on the organization's Safe Sport Committee, Athlete Health and Wellness Council and board of directors.

The victims will become stakeholders in focusing on the culture and practices within USA Gymnastics.

"Individually and collectively, survivors have stepped forward with bravery to advocate for enduring change in this sport," USA Gymnastics president Li Li Leung said in a statement.

It is about change, not money, says survivor

The settlement comes after hundreds of women, including Olympic gold medalist Simone Biles, came forward to speak of Nassar's abuse and how it had affected their lives.

"It's not about money, it's about change," said Rachel Denhollander, who first raised the alarm about the sexual abuse in the fall of 2016.

"The frank reality is the longer this goes on, the more difficult it is for survivors," she said. "So many of these women, they can't access medical care without a settlement. We had to balance that reality with the length of time it was taking. We felt it was in the best interest of everyone to accept this settlement ... so that survivors would receive some semblance of justice."

Denhollander described the "hellish" five years of the court case to reporters where she blasted officials and even the FBI for its botched investigation.

USA Gymnastics filed for bankruptcy in 2018 to try to consolidate the different lawsuits into one place. It has since moved forward under new leadership.