US youth tries sneaking into Germany to see girlfriend

A 20-year-old American flew to Frankfurt and attempted to sneak past an airport security point by posing as a janitor. The man was apparently trying to circumvent the pandemic restrictions so he could see his girlfriend. 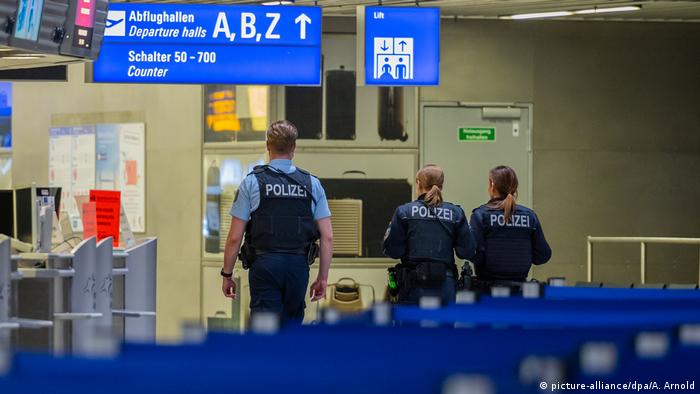 A US man's plot to visit his girlfriend in Germany was foiled by airport employees in Frankfurt, the airport police said on Tuesday.

Germany maintains an air traffic connection with the US but most US nationals are not allowed to enter the country under current travel restrictions.

The 20-year-old flew into Frankfurt Airport on Sunday and then tried to disguise himself as a janitor in order get past the airport security checkpoint.

The man put on a reflective vest and grabbed two black trash bags and headed towards the checkpoint, pretending he was there to empty the trash cans.

However, a "watchful employee" noticed that the man had no security ID and that he could also not speak German. She informed the police, who in turn detained the US national, the authorities said in their report.

When questioned by the police, the man admitted that he hatched the plot because he saw no legal possibility to see his Germany-based girlfriend.

According to the police, the man would still not be able to enter the country even if he managed to sneak past the security checkpoint, as he would still be in the airport's transit area and would need to go through a separate checkpoint managed by the border police.

The man was placed on a US-bound flight on Monday, the authorities said.

Hundreds of millions of people fly in and out of German airports every year. What restrictions have been put in place by Germany's biggest airports to help fight the COVID-19 pandemic? (16.03.2020)