US vows to support Afghan forces against Taliban

A top US general declined to say whether airstrikes against the Taliban would continue after the US troop pullout, but pledged to support Afghanistan "from over the horizon." 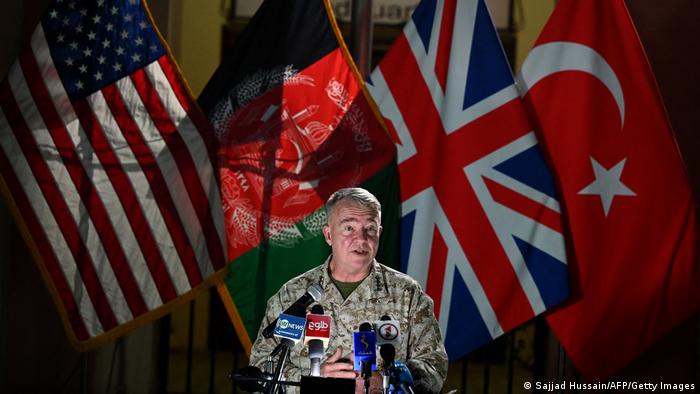 The United States will continue carrying out airstrikes in support of Afghan forces fighting the Taliban "in the coming weeks," a top US general said Sunday. However, it was not clear if the bombing missions would continue past the end of August.

The Taliban have been making rapid gains in Afghanistan as the US and its allies withdraw their troops. Their advance has sparked concern over the Islamist militants regaining power.

In recent weeks, the Taliban have escalated their offensive, gaining control over rural districts and surrounding provincial capitals.

Speaking to reporters in Kabul, US Marine General Kenneth McKenzie refused to comment on whether US forces would continue airstrikes after the end of their military mission on August 31.

At the same time, he stressed that the US "will continue to support Afghan forces" after the end of the mission, although "it will generally be from over the horizon."

"The United States has increased airstrikes in support of Afghan forces over the last several days and we're prepared to continue this heightened level of support in the coming weeks if the Taliban continue their attacks,"  McKenzie said.

The next "days and weeks" will show if the Afghan government will be able to defend the country from the Taliban, McKenzie said.

"I don't think it's going to be an easy path.. [but] I do not accept the narrative that there is going to be a civil war of necessity," he said.

What is the latest from the ground?

Fighting continued on Sunday on the outskirts of the southern city of Kandahar, where nearly 22,000 families have been displaced from their homes in the past month.

Home to 650,000 inhabitants, Kandahar is the second-largest city in Afghanistan. It was the epicenter of the Taliban power when they ruled Afghanistan between 1996 and 2001.

McKenzie acknowledged that the US carried airstrikes on Kandahar in recent days.

According to rights group Human Rights Watch (HRW), the Taliban were committing atrocities against civilians in areas they had captured.

"Taliban leaders have denied responsibility for any abuses, but growing evidence of expulsions, arbitrary detentions, and killings in areas under their control are raising fears among the population," Patricia Grossman, associate Asia director at HRW said in a statement.