US university for the deaf offers German signing course

Washington, DC-based Gallaudet is a leading university for the deaf and hearing-impaired, often preparing them for international careers. German is one of many courses on the curriculum. 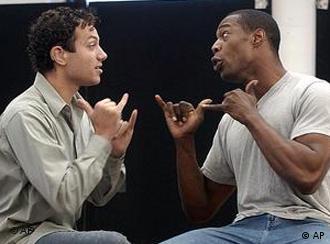 It's quiet in the seminar room in one of the campus buildings, but the students sitting there are nonetheless having an animated conversation about how to translate the German word Wohnung (apartment). They're using their fingers, hands and arms to talk since each of the six students in the German program at Gallaudet University is either deaf or hard of hearing.

One of the students, 19-year-old Michelle Morris of Florida, says she finds learning German easy. She's doing a degree in International Studies and aiming for a career with the United Nations. "That means I need to learn a foreign language," she said using sign language.

"Germany has such a strong position there [at the UN] that I thought knowing this language could be very helpful for me," explained Morris. Without a university education, she would likely not be able to fulfill her dream.

One of Morris' fellow students, Martin Dayan of France, moved countries to attend the university. "Gallaudet is the only university to offer degrees in the humanities for the deaf," he noted.

"There's nothing like it anywhere else in the world," Dayan said. "France is lagging way behind in this area." 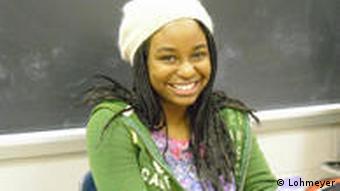 Michelle Morris plans to work at the UN

Founded in 1857 under a different name, the university's current 1,800 students can select classes in more than 40 different subjects, with lectures and seminars employing visual-learning technologies.

Classes are given in American Sign Language (ASL), which is recognized as an independent language.

While an international sign language does exist, it is not as complex as some of the hundreds of other sign languages used around the world. ASL also differs greatly from British sign language, for instance, even though the United States and the United Kingdom share English as a primary language.

International Sign has its own, unique grammatical patterns, sentence structures and vocabulary. It therefore does not merely translate oral or spoken language, like German sign language (DGS) does, said German professor Margaret Mullens.

"German sign language often relies on lip-reading since some signs are the same for different things," she said. In DGS, for instance, the same sign is used for "brother" and "sister."

"People must read lips in order to differentiate," the linguist pointed out.

Relying on lip-reading can make life difficult for many deaf people in Germany. "I couldn't learn anything more after a year because the teachers did not use signs," explained Carrie St. Cyr of Louisiana, who spent one year at a school for the hearing-impaired in Munich.

Students did not take their lessons seriously as a result, she said, and that's why many deaf students did not excel. "Many of them only went to school through the 10th grade," the confident 24-year-old said.

St. Cyr, who is married to a deaf German, now teaches DGS at Gallaudet, while Mullens teaches written German and German culture at the university. 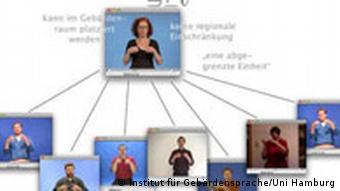 An electronic dictionary has been developed for DGS

Education has meanwhile changed in Germany since St. Cyr went to school in Munich. Now, the integration of pupils with learning difficulties and handicaps is often the norm.

Gallaudet University, however, believes that a concept focusing on the specific needs of the deaf and hearing impaired paves the way for the greatest success.

The students should receive the best education possible, said university spokeswoman Mercy Coogan. "We're a springboard for the students, and they can do everything here that other students do at other universities - and they're right in Washington, DC." Some of the Gallaudet students go on to do internships at the US Congress or the White House, she noted.

Professor Mullens, for her part, said Germany has made progress when it comes to the deaf. She's brought her students to Hamburg on various trips and while she said there's still room for criticism, "the [Hamburg-based] Institute for German Sign Language has now developed an electronic dictionary for DGS." This would help to standardize the language and make the signs more accessible to people around the world," she said.

The future for German at Gallaudet University, on the other hand, is uncertain, with looming budget cuts putting the study of the language at risk.

Integrating students with disabilities in German schools still a battle

For German children with disabilities it's always been difficult to get regular schools to allow them to attend. Now, however, things must change because of a UN convention requiring schools to accept all children. (03.12.2010)

Germany for beginners: first steps at the university

Countless forms, tests, requirements, limited seats, visas, finances: There's a lot to consider when it comes to studying in Germany. The overview below is intended to help you get your bearings. (13.01.2011)