US Secretay of State Antony Blinken met with his Russian counterpart as Moscow and Kyiv trade accusations of troop build-ups near disputed territory. 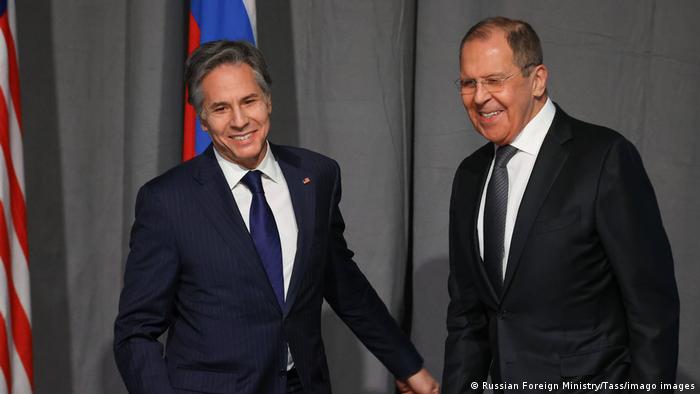 US Secretary of State Antony Blinken warned Russian Foreign Minister Sergey Lavrov on Thursday that there would be "serious consequences" for any  Russian aggression in Ukraine.

Meeting on the sidelines of an Organization for Security and Co-operation in Europe foreign ministers meeting in Stockholm, Blinken said he told his Russian counterpart that "the best way to avert crisis is through diplomacy."

However, if Moscow were to make a military incursion in Ukrainian territory, Blinken promised swift action such as hard-hitting economic sanctions. The US top diplomat stressed that the Ukraine poses no threat to Russia, and it is now on Russia to de-escalate the situation.

"We, as President (Vladimir) Putin has stated, do not want any conflicts," Lavrov told reporters.

The Russian foreign minister added "we have an interest in joining efforts to find a solution to the Ukraine crisis," but cautioned the US not to engage Russia in "geopolitical games."

Although a 2014 peace deal between Ukraine and Russia is technically still in effect, Lavrov said that Moscow required more long-term security guarantees.

Kyiv has accused Moscow of amassing tens of thousands of troops near their long, shared border, while the Kremlin in turn has accused the Ukrainian military of doing the same.

Russian officials have decried allegations that they are planning an invasion as inflammatory, saying that Russia is allowed to defend its own territory as it sees fit.

However, on Thursday the Kremlin admitted that the likelihood of fresh clashes in eastern Ukraine remained high.

Moscow said it was concerned by "aggressive" rhetoric from Kyiv as well as what it called "provocative" actions by Ukrainian troops near the line of contact between government forces and pro-Russian separatists in eastern Ukraine.

The Ukrainian government has rejected that such actions are taking place and denied a plan to take back territory in the east by force. Instead, it is accusing Russia of inventing the aggression for propaganda.

Lavrov lashes out at NATO

In a speech earlier on Thursday, Lavrov accused NATO of failing in its peacekeeping commitments.

"The architecture of strategic stability is rapidly being destroyed, NATO refuses to constructively examine our proposals to de-escalate tensions and avoid dangerous incidents," Lavrov said at the OSCE summit.

"On the contrary, the alliance's military infrastructure is drawing closer to Russia's borders. The nightmare scenario of military confrontation is returning," he added.

Further high-level talks between Washington and Moscow are expected to take place in the coming weeks to avoid a return to military conflict. Blinken indicated after meeting Lavrov that Russia's President Putin and US President Joe Biden were likely to speak directly in the near future.