With the number of cases of the Ebola virus declining, the United States has begun removing troops from the three worst-hit nations. The White House and the Pentagon hailed the mission as a success. 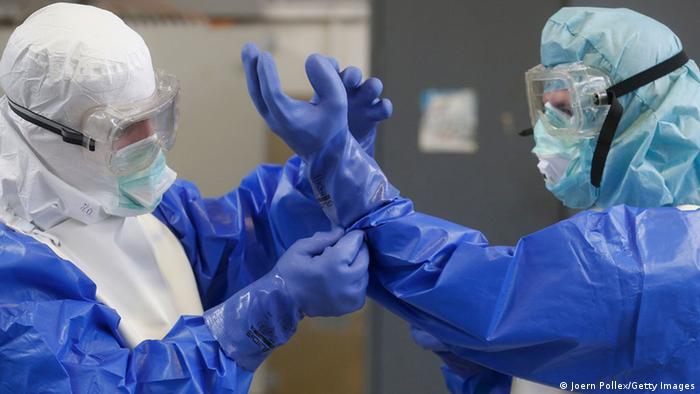 Of the 2,800 US troops deployed to fight the Ebola epidemic in West Africa, only 100 will remain after April 30, the Pentagon has announced. While careful not to say that the crisis has been overcome, the Obama administration praised the sharp decline in cases of the virus as a clear sign that international efforts had succeeded.

"We have bent the curve of the epidemic and placed it on a much improved trajectory," the White House said.

US Agency for International Development Administrator Rajiv Shah also lauded the work of the American Ebola team, noting that cases were down 80 percent and that in Liberia, new cases were down to just one or two per day.

"Just 10 months since the first US government personnel deployed, we have delivered extraordinary results," Shah said. Over the course of the worst Ebola outbreak in history, which began 13 months ago, the US helped build 15 treatment units, trained more than 1,500 health workers, as well as encouraging the international community to donate money and resources to the fight against the virus.

The Pentagon stated that all troops returning fromest Africa will be subjected to "established controlled monitoring procedures" to make sure they are free of the deadly disease.

Obama is expected to meet with Ron Klain, informally dubbed the "Ebola czar," on Wednesday. The president will then publically outline the next phase of the US effort to tackle the virus, which has killed almost 9,000 people- most of them in the West African countries of Guinea, Sierra Leone, and Liberia. On top of the high death toll, the outbreak is estimated to have cost the three nations $1.6 billion in economic growth.

Ebola quick test from Germany to be used worldwide

The test by a German pharmaceutical company is easy to use and store. It comes at a time when Ebola infections in western Africa are on the rise again. (09.02.2015)

Former Ebola patients are complaining about after-effects. Some have vision problems, others joint-pains. Have they developed an autoimmune response or has Ebola triggered the outbreak of a pre-existent illness? (05.02.2015)

Two large-scale clinical trials for an Ebola vaccine have begun in Liberia. The tests are being carried out by pharmaceutical companies GlaxoSmithKline and New Link/Merck. (04.02.2015)