US to increase troops in Iraq ahead of possible Mosul operation

US Defense Secretary Ash Carter has announced the US will send 560 more troops to Iraq to help prepare for an Iraqi-led recapture of Mosul. Iraqi forces have made a series of recent gains against "Islamic State." 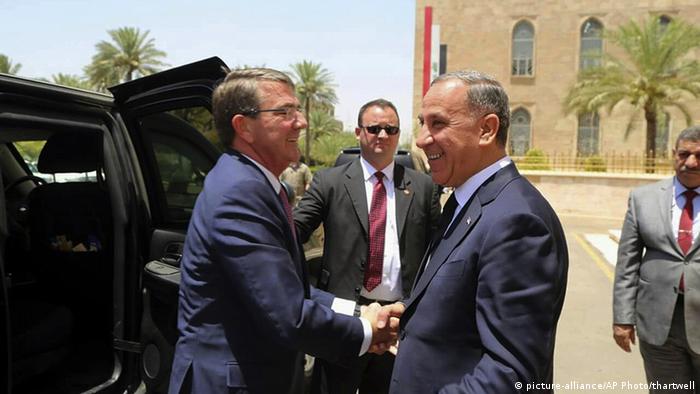 US Defense Secretary Ash Carter made the additional troop announcement during a visit to the Iraqi capital Baghdad on Monday, just days after after Iraqi security forces managed to seize a major airbase close to IS-held Mosul.

US officials said Carter would meet with Iraqi Prime Minister Haider al-Abadi and Defense Minister Khaled al-Obaidi, in addition to meeting with US Army Lieutenant General Sean MacFarland, who leads the coalition against the so-called "Islamic State" (IS) group.

Carter said that most of the new troops would be deployed to help build up the newly recaptured Qayara airbase, some 60 km (40 miles) south of Mosul.

The increase brings the total US troop presence to 4,647. US troops in Iraq mostly advise, train and provide assistance, but are not engaged in active combat role with Iraqi forces.

The Qayara airbase, which had been in IS hands since 2014, is planned to be used as a staging hub as Iraqi security forces move forward in their efforts to recapture Mosul, the largest Iraqi city still controlled by the militant group.

Carter added that US advisers were prepared to accompany and advise Iraqi battalions in the fight for Mosul, if needed.

A senior defense official said advisers could start accompanying Iraqi battalions in a matter of weeks or months. A team of American troops had reportedly been to Qayara since it was recaptured in order to conduct a quick site assessment.

Carter laid out his vision for Qayara, saying the air base would be a hub from which "Iraqi Security Forces, accompanied and advised by us as needed, will complete the southern-most envelopment of Mosul. That's its strategic role, and that's its strategic importance."

"The point of seizing that (Qayara) airfield is to be able to establish a logistics and air hub in the immediate vicinity of Mosul," Carter told reporters.

"So, there will be US logistics support."

Carter compared the role of Qayara to how forces used the eastern city of Makhmour, where US troops set up a base to support advancing Iraqi units.

NATO said it would use surveillance aircraft to collect intelligence, and begin training Iraqi forces inside the country, which, until now, had been trained in Jordan. The US has a separate training mission in Iraq.

IS militants, however, still control large swaths of the country and of neighboring Syria, with the onslaught of deadly attacks continuing throughout the region.

A massive IS suicide bombing on July 3 in Baghdad's Karada district saw as many as 186 killed. More recently, 37 people died in an attack at a Shiite shrine north of Baghdad.

The self-styled "Islamic State" has lost territory equivalent to the size of Belgium over the past 18 months, a UK think tank has said. But the report warns the group is refocusing on mass attacks outside its territory. (10.07.2016)