US to change presidential debate format after chaotic first round

In the wake of the first debate between US President Donald Trump and Democratic Party nominee Joe Biden, the commission that manages the event has said it will take steps to "maintain order" for future rounds. 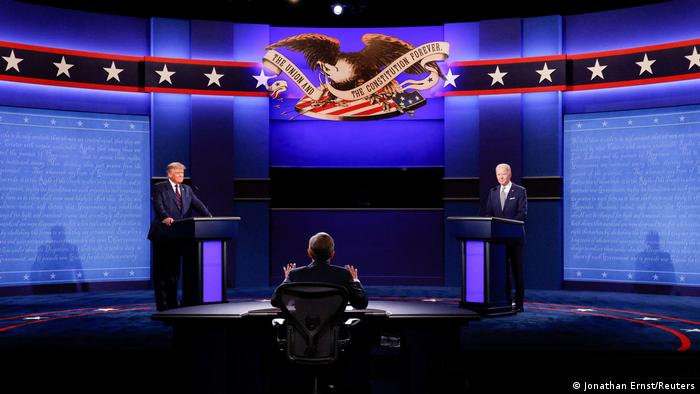 The commission that organizes US presidential debates says it is making changes to its format to "ensure a more orderly discussion" after the first debate between US President Donald Trump and Democratic nominee Joe Biden descended into chaos.

"Last night's debate made clear that additional structure should be added to the format of the remaining debates to ensure a more orderly discussion of the issues," the Commission on Presidential Debates (CPD) said in a statement. "The CPD will be carefully considering the changes that it will adopt and will announce those measures shortly."

Frequent interruptions, primarily from Trump, made it difficult for moderator Chris Wallace to keep control of the 90-minute debate held in Cleveland on Tuesday evening.

The non-partisan commission, which has organized every general election presidential debate since 1988, said it "intends to ensure that additional tools to maintain order are in place for the remaining debates.''

Organizers will "carefully [consider] the changes that it will adopt and will announce those measures shortly."

The next presidential debate, a town hall format, is scheduled to take place on October 15 in Miami.

France awards Legion of Honor to slain schoolteacher 4m ago