US Supreme Court puts off DACA decision — for now

The Supreme Court has rejected the Trump administration's efforts to bypass a federal appeals court and decide the fate of a program that protects hundreds of thousands of immigrants. DACA supporters hailed the decision. 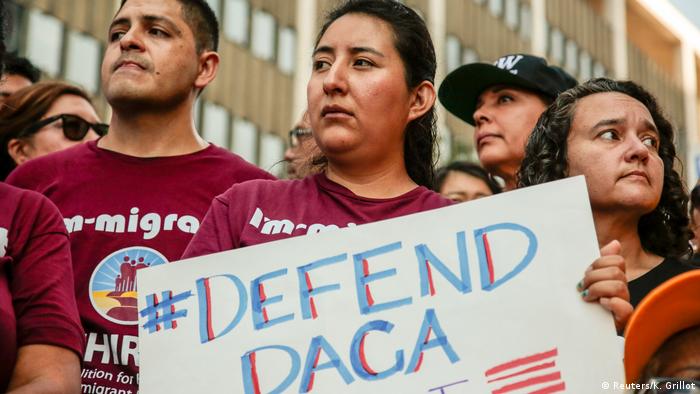 The US Supreme Court has declined a request from the Trump administration to hear arguments on the Deferred Action for Childhood Arrivals (DACA) program.

The White House had made the unusual step to proceed directly to the high court, instead of allowing the legal process to continue through the lower courts.

In a brief order, the Supreme Court justices said the Trump administration's request for review was "denied without prejudice."

DACA, the program that allows children brought illegally into the United States as children to stay in the country while working or studying, is set to expire on March 5 after President Donald Trump ordered its cancellation in September. DACA currently provides protection from deportation and work permits for about 800,000 young people in the US.

Monday's decision implies that the Supreme Court will stay out of the legal battle involving DACA for now, meaning the case will continue through the usual channels. At the moment, the case is still being considered by the San Francisco-based 9th US Circuit Court of Appeals. The Supreme Court justices said they expect the lower court to "proceed expeditiously to decide this case."

During a meeting with visiting governors at the White House on Monday, Trump accepted the court's announcement and explained why his administration had submitted the appeal. "You know, we tried to get it moved quickly because we'd like to help DACA. I think everybody in this room wants to help with DACA," he said.

But the president also criticized the court that currently handles the case. "Nothing's as bad as the 9th Circuit. Every single case filed against us is in the 9th Circuit."

Immigration activists were grateful for the extra time, but said many young immigrants are still left unprotected. California Attorney General Xavier Becerra, who has been involved in a lawsuit to preserve DACA, called the decision a "victory for the rule of law."

"We need a permanent solution now," said Greisa Martinez, a DACA recipient who works in Washington with the immigrants' rights group United We Dream. "This back and forth on DACA and the legislative process has created a crisis in our community."

House Minority Leader Nancy Pelosi, a Democrat, said the Supreme Court decision "shows that rescinding DACA was not only legally questionable, but also unjust and cruel."

Although Trump set a March 5 deadline for Congress to save DACA or let it expire, federal judges in San Francisco and New York have ordered the administration to keep DACA in place while courts consider legal challenges to Trump's termination. The legal process in the courts could take several months, extending well beyond next week.

The Trump administration has not tried to block these injunctions that are forcing the program to continue operating. As a result, US Citizenship and Immigration Services has been accepting and processing DACA renewals.

Meanwhile, efforts to save DACA in Congress have so far been unsuccessful. In the latest attempt, Trump proposed a path to citizenship for 1.8 million young immigrants as part of an immigration package that also asked for $25 billion (€20.2 billion) for a wall and other border enforcement measures and sharp cuts to legal immigration. The proposed law was rejected by the Senate.