US stops shipments out of Afghanistan through Pakistan

The United States has temporarily stopped shipments of supplies out of Afghanistan through Pakistan. The US military says protests along the route have made the journey too dangerous for its truck drivers. 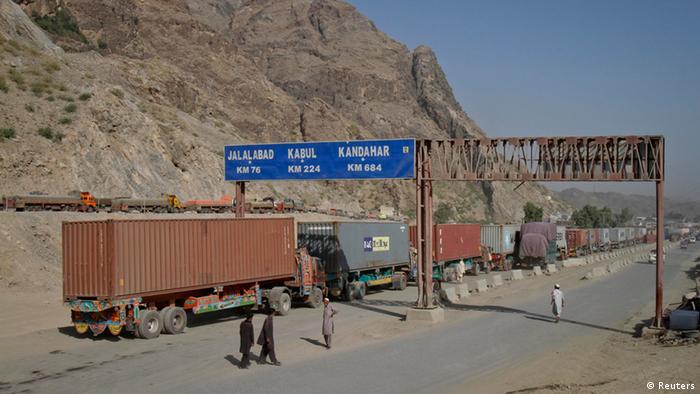 The Pentagon on Tuesday said it had ordered truckers under US contracts to avoid using the key supply route along the Afghanistan-Pakistan border. The route has seen ongoing protests over US drone strikes in Pakistan.

"We have voluntarily halted US shipments of retrograde cargo through the Pakistan Ground line of Communication (GLOCC) from Torkham Gate through Karachi," Pentagon spokesman Mark Wright said in a statement.

Pakistan's ambassador to Germany, Abdul Basit, has told DW Islamabad wants Kabul and the Taliban to reach a peace agreement by the end of 2014. He says India should not use Afghanistan to destabilize his country. (29.11.2013)

Wright said the suspension affects "retrograde cargo" – the equipment and other goods being sent home from military units as the US winds down its presence in the country as part of the troop pullout scheduled to be completed by the end of 2014. He added that the US was aware the protests had impacted the route, but said the military expected to resume using the road "in the near future."

About half of US cargo being taken out of Afghanistan through Pakistan travels through the Torkham crossing. Alternative routes exist for the US through Central Asia, but they take longer and are more expensive to use.

US drone strikes are deeply unpopular in Pakistan. They have sparked public outrage from officials in Islamabad, who view them as a violation of Pakistan's sovereignty.

US routes through Pakistan have been shut down in the past, including a seven-month Pakistani government-enforced stoppage after US airstrikes on the Afghan border accidentally killed two dozen soldiers in November 2011. The route reopened in July 2012 after Washington apologized for the attack.