US soldiers have reportedly arrived in northern Syria - the first official deployment of US ground troops in the country. The troops are tasked with training Kurdish and Syrian opposition forces battling "Islamic State." 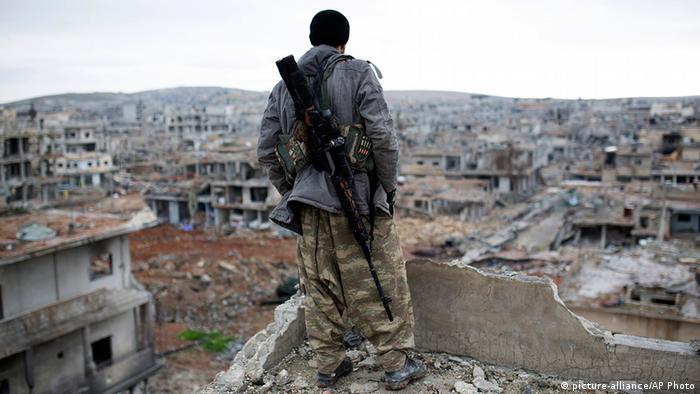 The Britain-based monitoring group, Syrian Observatory for Human Rights, said on Thursday that "more than 50 American instructors" had arrived in northern and northeastern Syria in the past two days.

A Kurdish source told the AFP news agency that one group of instructors had been seen in Kobani, the town on Syria's border with Turkey that was besieged by "Islamic State"(IS) until the jihadis were driven back in January.

The Observatory's director, Rami Abdel Rahman, said US trainers had crossed over the border from Turkey and from the autonomous Kurdish region in neighboring Iraq. He added that most of them were sent to Kobani, where they're expected to train a newly formed Arab-Kurd coalition backed by the United States. The other group was sent to Hasakeh province in the east.

A source with the Kurdish People's Protection Units (YPG) told AFP the American instructors would help plan offensives against the IS-held city of Jarablus and its de-facto capital, Raqqa.

Boots on the ground

US President Barack Obama announced in late October that around 50 US special operations troops would be deployed in Syria.

The US Central Command declined to comment on the latest reports that soldiers had arrived.

"We have said before that we will be putting a small number of troops on the ground in Syria to coordinate with our partners there in a non-combat role. We will not be providing the specifics of their whereabouts or travel plans beyond that," it said in a statement.

Brett McGurk, US special envoy for the anti-IS coalition, said Sunday that American forces would be arriving on the ground "very soon."

He also said organizing local fighters and isolating IS stronghold Raqqa would be among the troops' main objectives.

IS launched a major offensive on Kobani and the surrounding area in September last year. The battle for the city lasted for weeks, forcing thousands of Kurds to flee their homes and sparking a refugee crisis in neighboring Turkey.