Former US goalkeeper Hope Solo has said ex-FIFA boss Sepp Blatter groped her backside during the 2013 Ballon d'Or ceremony. Sexual harassment wasn't just a problem in Hollywood but in women's football as well, she said. 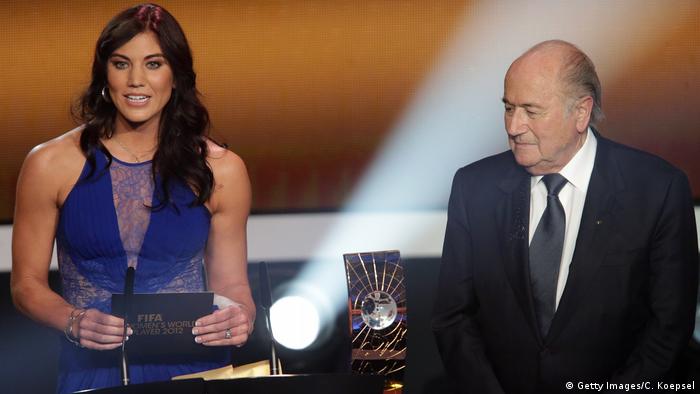 Hope Solo, a star goalkeeper and former member of the US football team, accused former FIFA President Sepp Blatter of sexually harassing her, in an interview published on Friday.

"Sepp Blatter grabbed my ass, it was a few years ago at the Ballon d'Or ceremony just before I got on stage," Solo told Portuguese newspaper Expresso.

The 36-year-old soccer star said that 81-year-old Blatter made the move as she was about to present an award to her teammate Abby Wambach at the ceremony.

Solo, a World Cup winner and two-time Olympic champion, said that sexual harassment in sport was "rampant" and that she hoped more athletes would speak out against it.

"I wish more women, especially in football, would speak against it, about their experiences," she told the paper.

"I think it is important to acknowledge that this doesn't just happen with the powerful white men. It can happen all across the board, it can happen between women," she continued.

"It's out of control, not just in Hollywood but everywhere," Solo said, referencing the wave of sexual harassment and assault allegations against high-profile men in entertainment and politics, which was triggered by a scandal involving movie mogul Harvey Weinstein.

Blatter dismissed Solo's claims, telling the Guardian newspaper that the allegation "is ridiculous."

Blatter has a history of sexist behavior when it comes to women's soccer. In 2004, he argued that the popularity of the women's game could be boosted if the players wore tighter shorts.

In 2012, US forward Alex Morgan said that Blatter failed to recognize her during that year's Ballon d'Or, even though she was one of three nominees for the women's Player of the Year.

The former FIFA head was suspended from office and banned from the sport for six years in 2015 following a corruption scandal.

From Harvey Weinstein to Martin Luther: DW's 'Men of the Year' in culture

While GQ magazine includes Arnold Schwarzenegger and Philipp Lahm in its "Men of the Year" awards, DW's culture department picked men who made headlines on the cultural scene in 2017. (10.11.2017)