The US navy has used gunfire to chase off Iranian vessels in the Persian Gulf for the second time in a few weeks. It took two rounds of fire before the boats turned back. 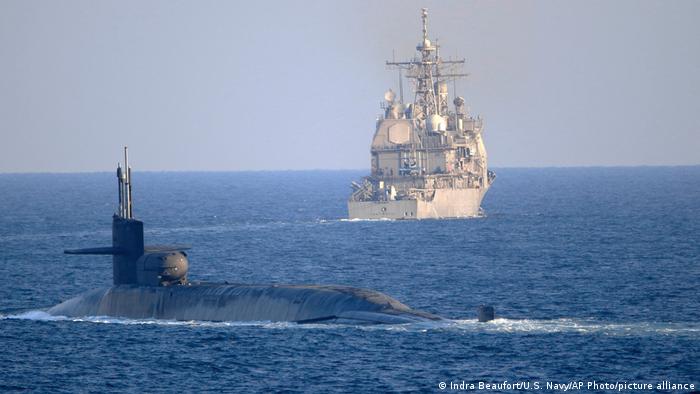 The IRGC fast boats sped towards a group of US navy ships, including the USS Georgia guided-missile submarine, before being turned back

A US navy coast guard ship fired off two salvos of machine-gun fire as a warning to rapidly approaching Iranian boats in the Strait of Hormuz on Monday, the US Defense Ministry said.

The 13 fast boats belonging to the Iranian paramilitary group, the Islamic Revolutionary Guard Corps (IRGC), were carrying out "unsafe and unprofessional" maneuvers, the Pentagon said.

The boats came within 150 yards (137 meters) of several US Navy ships, including the guided-missile cruiser, USS Monterey, before turning back.

"Sadly, harassment by the IRGC Navy is not a new phenomenon. It is something that all of our commanding officers and the crews of our vessels are trained for," Pentagon press secretary John Kirby said.

"This activity is the kind of activity that could lead to somebody getting hurt and could lead to a real miscalculation there in the region, and that doesn't serve anybody's interests."

Increased activity in the Persian Gulf

The USS Monterey had intercepted a boat carrying arms shipments on Sunday in the Arabian Sea, the destination of which was suspected to be Yemen where Iran-backed Houthi rebels are fighting an ongoing war against the Saudi-backed government.

Kirby said that the Iranian boats on Monday were "acting very aggressively."

It took two rounds of warning shots from the coast guard cutter Maui to scare the IRGC boats off.

A similar event happened late last month when IRGC vessels came too close to a patrol line in the northern end of the Persian Gulf near Kuwait. The warning shots fired then were the first in almost four years.

The US and Iran are involved in ongoing, indirect negotiations in Vienna over a possible return to the 2015 Iran nuclear deal.