US sending thousands of troops to Mexico border

The US military will send more than 5,000 troops to secure the border as a caravan of migrants makes its way through Mexico. The number of troops being deployed is far higher than initially forecast. 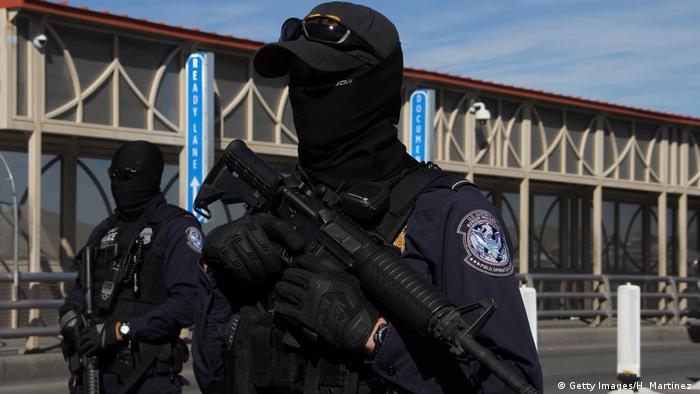 The US Defense Department said on Monday it was sending 5,200 troops, including armed soldiers, to secure the country's border with Mexico as a caravan of migrants makes its way to the frontier.

General Terrence O'Shaughnessy, the head of US Northern Command, said 800 US troops were already on the way to the Texas border and that the remainder of the troops would be at the southwest border by the end of the week. He said troops would focus first on Texas, followed by Arizona and then California.

"That is just the start of this operation. We will continue to adjust the number and inform you of those," O'Shaughnessy told reporters.

The announcement comes amid accusations that US President Donald Trump was trying to focus on the Central American migrant caravan for political advantage ahead of the midterm elections on November 6.

Earlier in the day, Trump labelled the caravan's effort an "invasion" and declared that the migrants would find the US military waiting for them.

A caravan of Central American migrants, estimated to number between 3,500 and 7,000, who left their countries in mid-October are now in southern Mexico. Most are from Honduras, seeking to escape poverty, violence and government corruption afflicting their nation.

Both Honduras and El Salvador have been plagued by rampant violence, while a lack of jobs has driven many Guatemalans to flee their country.

There are already 2,100 National Guard troops at the border, sent after a previous Trump request in April.

The figure of 5,200 troops is far higher than the 800 to 1,000 initially forecast and more than double the 2,000 who are in Syria fighting the "Islamic State" militant group.

The troops are expected to perform a wide variety of functions such as building tents and barricades and transporting supplies for the Border Patrol, and not be involved in policing the border, officials said.

The US military is prohibited from carrying out civilian law enforcement on US soil unless specifically authorized by Congress. The president is authorized under some specific statutes to deploy soldiers for riot control or relief efforts after natural disasters.

In a replay of his 2016 campaign, President Trump is whipping up anti-immigrant sentiment to stoke his base for the midterm election. But it will do nothing to stop what is a slow moving train wreck in Latin America. (24.10.2018)

Thousands of Central Americans walking through Mexico in a large group in an effort to reach the US have continued on their way after being blocked on a bridge. They may be met by troops at the border. (27.10.2018)

US President Donald Trump has threatened to order the military to close the US-Mexico border to stop an "onslaught" of migrants. Mexico itself geared up for the arrival of up to 3,000 people from Honduras on its border. (19.10.2018)