It's the first, and possibly only, bipartisan review of the security and communication failures during the deadly January 6 Capitol storming. 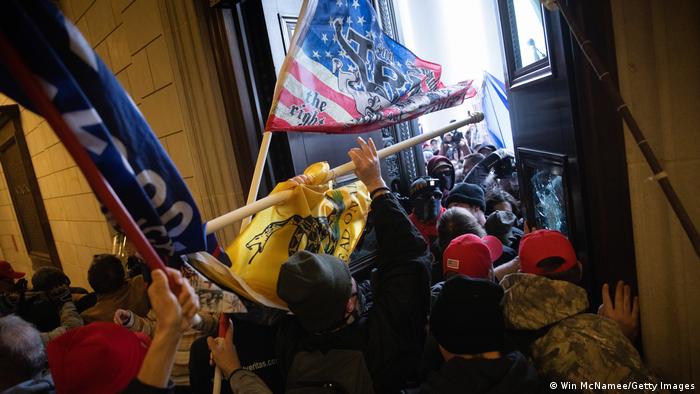 Two Senate committees assessing security in the aftermath of the January 6 storming of the US Capitol building laid out broad government, military and law enforcement breakdowns in a report released on Tuesday.

The report advised giving the Capitol Police chief greater authority. It also laid out plans for rapid response by the Pentagon, the base of the US Defense Department.

In a statement, US Capitol Police (USCP) welcomed the report. It said it had already changed its operations planning to focus on national security.

The service continued to point to US intelligence failures to warn of the attack.

Key findings from the report

The Senate Rules and Homeland Security bipartisan committees found that multiple intelligence agencies did not function properly during the incident.

It found that Capitol Police officers did not have the proper training to stop the rioters.

During the incident, the committees found that the Pentagon spent hours assessing pleas for help from Capitol Police. They deployed DC National Guard troops nearly three hours after they were requested.

This delay was procedural and was not down to foot-dragging at the White House, a Senate aide said.

The senators criticized the Federal Bureau of Investigation and the Homeland Security Department for downplaying online threats. The committees said they did not issue formal intelligence bulletins to help law enforcement.

The report recommended empowering the Capitol Police chief to ask directly for DC National Guard help in an emergency in order to speed up the deployment process.

Senator Amy Klobuchar, a Democrat who chairs the Rules committee, said she and Republican Senator Roy Blunt would introduce legislation to make the change.

The senators recommended that the three-member Capitol Police board "regularly review the policies and procedures" after finding they did not understand their own authority.

The report further recommended a consolidated intelligence unit within the Capitol Police after widespread failures from multiple agencies in predicting the incident.

The USCP responded to the report. In a statement, it stressed that it was prepared for a large demonstration but did not know "thousands of rioters were planning to attack." It added that improvements were needed in intelligence analysis and distribution, both at the federal level and within its own force.

What's missing from the report

The 95-page document noted that Trump encouraged his supporters to go to the Capitol. A copy of his speech was appended to the report, but it did not discuss his role.

The committee leaders acknowledged the report confined its focus to intelligence gathering, security preparations and emergency response. It did not explore the motivation for the attack.

Gary Peters, a Democrat who chairs the Senate Homeland Security Committee, told press that the report was not intended to be a substitute for a bipartisan commission that could investigate further.

But last month, Senate Republicans blocked legislation to set up a bipartisan commission that could potentially do this.

The Senate committees said they did not get all the information they had sought from several agencies regarding the storming.

US Capitol storming: What you need to know

World leaders and former US presidents condemned the violence on Wednesday night. Some Democratic lawmakers said they were drawing up plans to impeach President Trump for a second time.