A bill to rein in the spying authority of the National Security Agency (NSA) has been blocked by the US Senate. Opponents said the legislation would have undermined Washington's counterterrorism efforts. 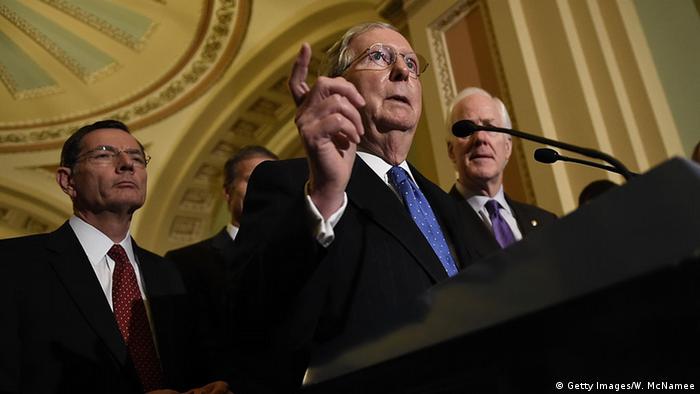 On Tuesday, lawmakers in the upper house of the US Congress fell just two votes short of gaining support for a bill that would have ended the NSA's authority to collect Americans' telephone metadata indiscriminately.

The 58-42 vote in the US Senate on the bill, dubbed the USA Freedom Act, fell largely along party lines with Democrats supporting the measure to rein in the NSA and Republicans opposing it. Sixty votes were needed to pass the bill.

"Obviously I'm disappointed by tonight's vote," Leahy said. "I will continue to fight to preserve our constitution and our rights as Americans."

Opponents to the USA Freedom Act pointed to the continued threat of terrorism as their primary concern in passing any legislation that could prevent another attack.

"If our aim is to degrade and destroy ISIL, as the president has said, then that's going to require smart policies and firm determination. At a minimum, we shouldn't be doing anything to make the situation worse," Republican Senator Mitch McConnell, who will become Senator majority leader in January, said, referring to the terrorist group "Islamic State."

Tuesday's bill took aim specifically at the spy agency's right to collect phone records in bulk by requiring the NSA to obtain permission to view phone records of a specific person. It resembled similar reforms passed by the Republican-controlled House of Representatives in May.

Former NSA contractor Edward Snowden leaked documents in 2013 which revealed mass government surveillance made legal by the post 9/11 Patriot Act. The revelations have pushed President Barack Obama to support reform amid alarm by civil liberties groups, tech firms such as Apple, Google and Microsoft, and the cyber security sector.

Tuesday's vote comes as lawmakers on both sides of the aisle face the task in 2015 of larger debates regarding privacy rights and government surveillance with the impending expiration of Section 215 of the Patriot Act, under which the NSA can collect metadata. The law is up for renewal in June.

However, the future of such efforts is now questionable with a reshuffle of the Senate and the House of Representatives following a sweep by Republicans in the November mid-term elections. Most notably, the Democrat majority in the Senate will be replaced by Republican leadership, thus giving Republicans full control of both houses.