US Senate approves Kerry as Secretary of State

Former US presidential candidate John Kerry has been overwhelmingly approved as Washington's new Secretary of State in a Senate vote. However, Kerry's fellow nominees for top posts may face a tougher challenge. 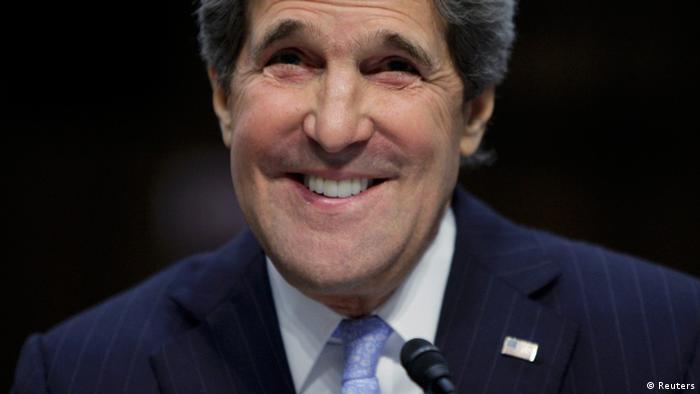 The US Senate gave its approval on Tuesday evening for Massachusetts senator John Kerry to become the country's next secretary of state.

The chamber voted 94-3 in favor of the 69-year-old, indicating clear support from Republicans as well as Democrats for his nomination by President Barack Obama. Kerry did not vote for himself, instead casting a neutral "present" vote.

Earlier in the day, the chamber's Foreign Relations Committee approved the nomination unanimously. Senator Robert Menendez, who is set to take over from Kerry as committee chairman, welcomed the Senate vote. "The State Department could not be in better hands," said Menendez.

At a confirmation hearing with the committee last week, Kerry highlighted a need for "fresh thinking" on foreign policy. "American foreign policy is not defined by drones and deployments alone," he said.

The 69-year-old, who ran unsuccessfully as the Democratic presidential candidate in 2004, has previously been involved with formulating US policy on Afghanistan and Pakistan. Kerry was also instrumental in pushing the New START nuclear arms reduction treaty with Russia through the Senate in 2010.

While the nomination of Kerry - a Foreign Relations Committee member for 28 years - was never in real doubt, two of Obama's other nominations were not expected to have such an easy ride.

Former Republican senator Chuck Hagel, nominated as defense secretary, faces tough questions from former party colleagues over both his support for defense cuts and about whether he is sufficiently tough with respect to Iran.

Present White House counterterrorism adviser John Brennan, earmarked for the directorship of the CIA, was expected to receive a grilling by Republicans over White House leaks and by Democrats over the use of drone aircraft.

Hagel's confirmation hearing is scheduled for Thursday, while Brennan's is set for February 7.

Current Secretary of State Hillary Clinton was expected to leave her post Friday, with speculation remaining high that she has plans to contend the presidency in 2016.