Zhanna Nemtsova, 32, of Deutsche Welle's Russian-language service, was presented the "International Woman of Courage Award" by Secretary of State John Kerry at a March 29 ceremony in Washington, D.C.. 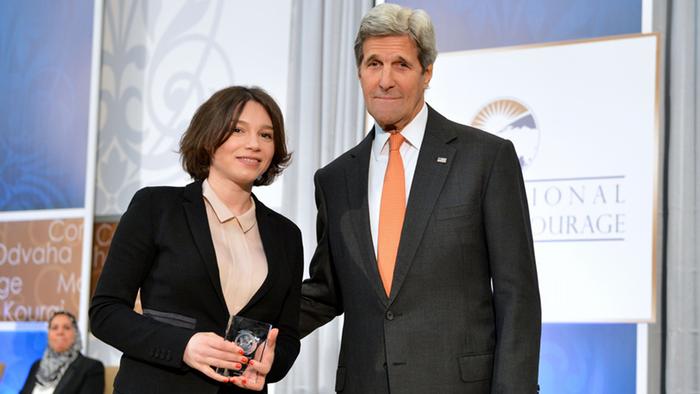 Nemtsova received the distinction for her "commitment to democracy, education and freedom of information in her homeland," the State Department announced. In presenting the award, Secretary Kerry highlighted her courageous struggle against propaganda and corruption in Russia and her efforts to protect the rights of Russian citizens.

At the ceremony John Tefft, US ambassador to Moscow, congratulated Nemtsova and emphasized her strength and perseverance in the effort to shed light on the circumstances around the death of her father, Boris Nemtsov.

Zhanna Nemtsova joined DW's Russian-language service in August 2015. She recently founded the "Boris Nemtsov Foundation for Freedom" in honor of her father and published the book "Russland wachrütteln" ("Wake up Russia") in German.

The US Secretary of State has awarded the "International Woman of Courage Award" annually since 2007. It honors those who have committed themselves with extraordinary courage to human rights and equality for women.

Opinion: Getting to know my own father