Two of Russia's Roscosmos cosmonauts and a NASA astronaut docked safely on a mission in honor of the 60th anniversary of Yuri Gagarin becoming the first person in space. 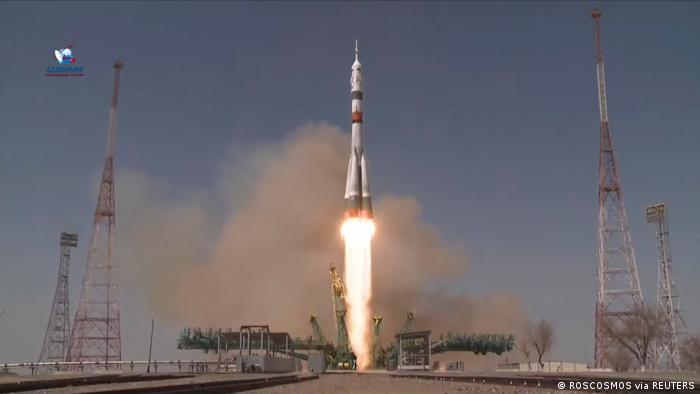 They launched just a few days before the 60th anniversary of Soviet cosmonaut Yuri Gagarin becoming the first person in space.

The trio docked at the ISS after a two-orbit journey that lasted just over three hours.

They had taken off in the Soyuz MS-18 spacecraft that carried the legendary cosmonaut Gagarin's name. His portrait has been added to its exterior.

"We'll celebrate it together," Dubrov was quoted as saying before his first trip to space, according to AFP. "And we'll work hard!"

The crew is set to work on hundreds of experiments in biology, biotechnology, physical science and Earth science during their mission.

Two Russian cosmonauts, four US astronauts and one from Japan are set to welcome the Soyuz MS-18 crew members at the ISS, some 400 kilometers (289 miles) above Earth.

How has the space industry changed?

But Russia has also seen opportunity in space cooperation with the West despite geopolitical rows.

"When we first started, we were competing with each other and that was one of the reasons we were so successful at the beginning of human space flight," Vande Hei was quoted as saying by AFP ahead of the Friday launch.

"As time went on we realized we could achieve a bit more working together ... I hope that will continue into the future."

To the Cosmodrome, and Beyond

To the Cosmodrome, and Beyond