US, Russian crew blasts off to International Space Station

A two-man, US-Russian crew has blasted off to the International Space Station. They will join three others orbiting the Earth at the ISS conducting research. 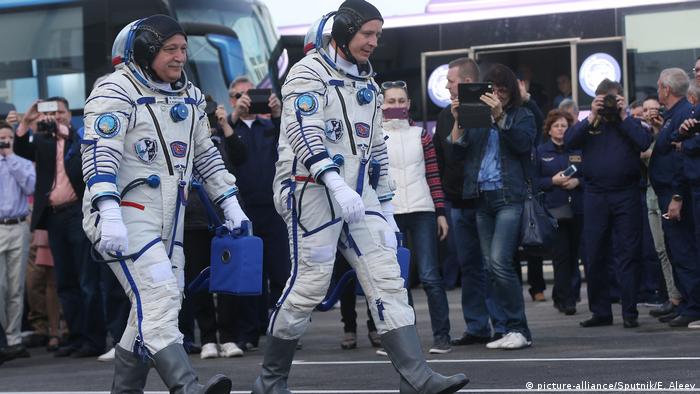 Fischer and Yurchikhin were scheduled to arrive at the ISS six hours and 10 minutes later. The space station orbits about 250 miles (400 kilometers) above the Earth.

It is the first trip to space for Fischer, who said before departure his greatest concern was using the toilet in zero gravity.

"It's all about suction, it's really difficult," Fischer said in a NASA interview before launch. "You just can't train for that on the ground, so I approach my space-toilet activities with respect, preparation and a healthy dose of sheer terror."

Two days before the launch, NASA astronaut Randy Bresnik shared a time-lapse video of the Soyuz rocket being transported to the launch site.

Yurchikhin is on his fifth mission. Station commander Peggy Whitson, 57, is on her third long-term mission. She is the first female commander of the space station and NASA's most experienced astronaut.

On Monday, Whitson is set to break the 534-day record for cumulative time in space for a US astronaut.

Two days after Fischer and Yurchikhin dock at the ISS the Orbital ATK Cygnus cargo craft launched earlier this week from Florida will arrive to resupply the station.

The three astronauts currently at the station have been in space for more than 150 days and are scheduled to return to Earth in June.

Yurchikhin and Fischer's mission at the station lasts until September.

A US and a French astronaut spent over six hours outside the International Space Station (ISS), preparing the outpost for the upcoming "space taxis." Both SpaceX and Boeing are developing the new type of spaceship. (24.03.2017)

Three new astronauts are on their way to the ISS. DW asked Thomas Reiter, the German coordinator of the ISS program, what advice he would offer them, and if he wouldn't rather be up there himself. (17.11.2016)

This could be a special year for human spaceflight. Europe and the US are collaborating and progressing with the Orion spacecraft, and next week, SpaceX inaugurates a revamped launch site in part for human cargo. (09.02.2017)