World leaders and diplomats praised the cease-fire between Hamas and Israel, but warned there was more work ahead. The Palestinian Authority's foreign minister also said the truce was "not enough." 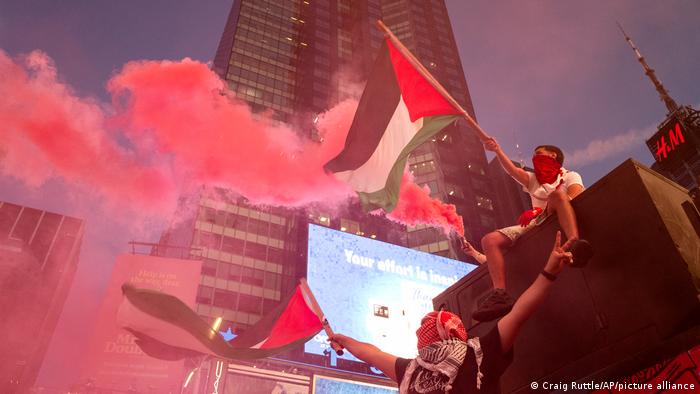 With the truce between Israel and Hamas militants taking hold on Friday, governments from around the world greeted the break in fighting and called for conflicting parties to move closer to permanent peace. An Israeli politician slammed the cease-fire as "embarrassing."

US President Joe Biden said that both Palestinians and Israelis "equally deserve to live safely and securely" and pledged to continue "quiet and relentless diplomacy" towards that goal.

"I believe we have a genuine opportunity to make progress and I'm committed to working toward it," he said.

The spokeswoman for Russia's Foreign Ministry, Maria Zakharova, said the truce was "an important but still insufficient step."

"In order to avoid a resumption of violence, we must double international and regional efforts on relaunching direct political negotiations between Israel and the Palestinians," she said.

China called on the international community to "extend helping hands" to the region.

"The international community should promote the resumption of peace talks between Palestine and Israel, and achieve a comprehensive, just and lasting solution to the Palestine issue on the basis of the two-state solution," said Foreign Ministry spokesman Zhao Lijian.

He also said China would provide monetary aid and 200,000 coronavirus vaccines for Palestinians.

"We are appalled and regret the loss of life over these past 11 days," he said in a statement. "As the EU has consistently reiterated, the situation in the Gaza Strip has long been unsustainable."

German Foreign Minister Heiko Maas thanked Egypt for mediating in the conflict and said it was "good" that there would be no more victims.

"Now we have to deal with the causes, rebuild trust and find a solution to the Middle East conflict," he said on Twitter.

Chancellor Angela Merkel said there was not yet a "concrete initiative" to go beyond the latest cease-fire. Answering a question from a DW correspondent in Berlin on whether she might try to spearhead a push for peace with Joe Biden before leaving office, Merkel said that such initiatives would need to be instigated by the US.

She added that "Germany is of course ready" to play an important role in the peace effort.

UK Prime Minister Boris Johnson also welcomed the news of a cease-fire, and said that regional leaders "must now work to find a durable solution to the Israeli-Palestinian conflict that prevents terrorism, ends the cycle of violence and delivers a sustainable and just peace."

Iran hailed the truce as a "historic victory" of Palestinians over Israel.

Separately, Iran's Supreme Leader Ayatollah Ali Khamenei called on Muslims in other countries to pressure their governments into backing Palestinians.

"Muslim states must sincerely support the Palestinian people, through military ...or financial support ... or in rebuilding Gaza's infrastructure," he said in a statement.

Turkey also welcomed the cease-fire, but said that Israel should also lift "the inhumane siege" on Gaza.

"In order to prevent a repeat of the pain and tears seen in Palestine, Israel must be held accountable in the international arena for the crimes it committed" said the Turkish Foreign Ministry.

Looking back at the fighting which killed some 243 Palestinians in Gaza and claimed 12 lives in Israel, Prime Minister Benjamin Netanyahu said that the conflict did "maximum damage to Hamas with a minimum of casualties in Israel."

Netanyahu said Israel was "attacked in an unprovoked manner by the Hamas terrorist organization."

He also pledged to respond with "a new level of force" to any attacks from Hamas militants.

Netanyahu: Hamas knew 'a deadly rain of fire would fall on them'

"If Hamas thinks we will tolerate a drizzle of rockets, it is wrong," Netanyahu said.

Some far-right politicians in Israel slammed the truce as a sign of weakness, with former Netanyahu ally Gideon Saar calling it "embarrassing" and Ben Gvir, head of the Jewish Power party, decrying it as "a grave surrender to terrorism and the dictates of Hamas."

The truce is "not enough at all," said the Palestinian Authority's Foreign Minister Riad Al-Malki. Speaking to reporters on the sidelines of a UN meeting on the conflict, the diplomat said the cease-fire did not address core issues that started the violence.

Al-Malki slammed the Israeli soldiers' "desecration" of the Al-Aqsa mosque in Jerusalem, and Israel's policy of evicting Palestinians from their homes.

The foreign minister said the world must now tackle the issues of Jerusalem's future and the creation of an independent Palestinian state.

According to Abu Saada, Netanyahu and other right-wing politicians in Israel were "embarking on settlement expansion and creeping annexation in the West Bank."

"I believe that without a political settlement to the Palestinian-Israeli conflict and without resolving the Israeli siege and blockade against Gaza, we will be in for another cycle of violence again," he said.

Middle East crisis: What can stop the cycle of violence?