Hundreds of US couples packing AR-15 rifles have had their marriages and weapons blessed at an unusual church ceremony. Children from a nearby elementary school had to be relocated for their safety. Worshippers clutched rifles and donned crowns made of rounds of bullets, as they exchanged or renewed wedding vows at a church in the US state of Pennsylvania on Wednesday.

Brides wearing white and grooms in dark suits brought dozens of unloaded AR-15s for the commitment ceremony at the World Peace and Unification Sanctuary building in the town of Newfoundland, about 190 kilometers (120 miles) north of Philadelphia.

The church, which has a worldwide following, believes the AR-15 symbolizes the "rod of iron" in the book of Revelation, and encourages couples to bring the weapons.

Read more:  Guns and Wall Street — a match made in heaven?

Many in the congregation, like many other Americans, believe US school shootings do not justify stricter gun laws in a country where firearms are linked to more than 30,000 deaths annually.

At the entrance to the church, an attendant checked each weapon at the door to make sure it was unloaded and secured with a zip tie.

The elaborate commitment ceremony, featuring about 250 couples, went off without a hitch, but forced classes at a nearby elementary school to be moved down the street to other campuses. 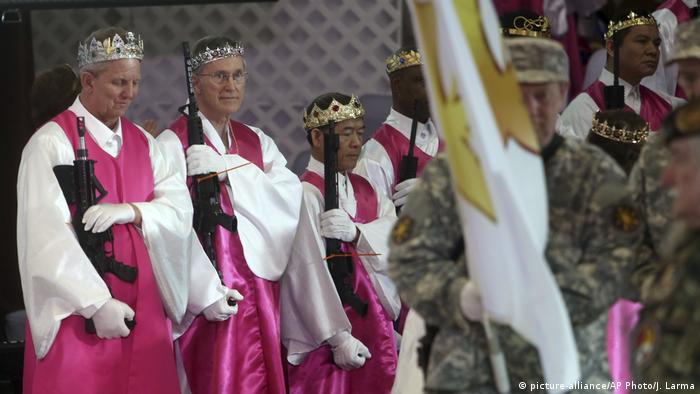 Some celebrants wore crowns made of bullets, while church officials dressed in flowing bright pink and white garments

The AR-15 which featured so heavily in the ceremony was used in the Florida high school massacre on February 14. The ceremony fell on the same day that the survivors returned to classes for the first time since the killing of 17 students and school staff by a 19-year-old gunman.

The organizer, Hyung Jin Moon — the son of the late church's founder and self-declared "messiah" Sun Myung Moon — used the ceremony to back US President Donald Trump's call for school staff to be armed. In a statement, he said teachers at the Florida school should have been trained to use weapons.

"Each of us is called to use the power of the 'rod of iron' not to arm or oppress as has been done in satanic kingdoms of this world, but to protect God's children," he said, citing the Book of Revelation in the Bible.

His followers were equally resolute about the ceremony's symbolic meaning.

"We as good people, we strongly believe in the Second Amendment … So showing the rod of iron, which represents, for our church, it's the AR-15, and it represents that you can protect against evil with that rod of iron in a sense," said worshipper Sreymom Ouk. 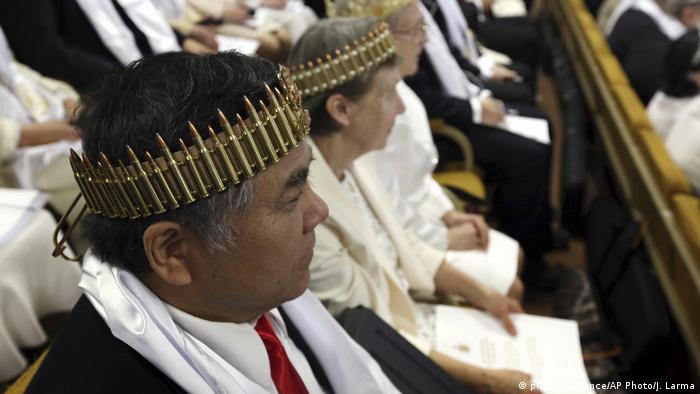 The ceremony was deemed a threat to local elementary schoolchildren, whose classes were relocated away from the church

Wednesday's ceremony also brought out protesters, including Lisa Desiena, who denounced the breakaway faction of the Unification Church as an "armed religious cult."

"I don't need a freaking assault weapon to defend myself. Only thing they're good for is killing. Period. That's all that weapon is good for, mass killing. And you want to bless it? Shame on you," she said.

Another protester, Bill Duff, said he had never had reason to bring his gun to church.

The man labelled a coward by US President Donald Trump for failing to confront a school shooter has denied hiding from fire. Meanwhile, gun control activists in Florida have shown no sign of backing down. (26.02.2018)