US policy in Africa faces reckoning in Mali | World| Breaking news and perspectives from around the globe | DW | 30.01.2013

For years, the US trained the Malian army to fight militants based in the Sahel desert. But Washington's efforts have faced a major reversal, with armed Islamists now threatening Mali's survival as a state. 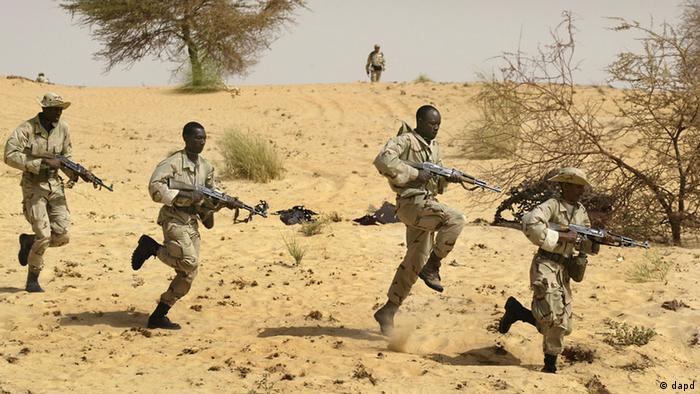 As French forces have swept through northern Mali in a campaign to flush out Islamist militant groups from the region's major population centers, the United States has backed France's military intervention, offering Paris transport and refueling planes as well as intelligence support. But these modest contributions belie a much deeper American involvement in a region where militants are making inroads against governments shaken by popular unrest.

Situated on a critical juncture between North and West Africa, Mali has been a focus of US counterterrorism efforts. The Malian armed forces have just 7,000 personnel in a country three times the size of Germany. Islamist militant groups have exploited the security vacuum to take refuge in Mali's northern desert expanse.

According to Susanna Wing, a Mali expert at Haverford College, US special forces were training the Malian army as far back as the 1990s, primarily providing instruction on "how militaries are supposed to operate in democracies." 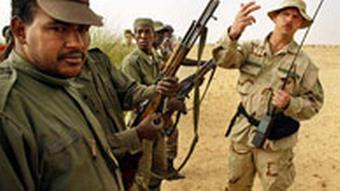 But in the aftermath of the September 11, 2001 attacks, Washington launched the Pan-Sahel Initiative, a modest 7.5-million-dollar program comprising four African states - including Mali - that sought to combat the amorphous network of Islamist militants in the Sahel desert.

"It shifted over the years and became very much a counterterrorism program in the 2000s, but this had been going on for decades actually," Wing told DW.

By 2005, Washington's counterterrorism efforts evolved into the Trans-Saharan Counterterrorism Initiative, a more robust training program with a budget of $500 million (370 million euros) over five years. A key focus of the expanded program was improving coordination and communication among the militaries of the Saharan and Sahelian states.

"Mali was included because it was a frontline state where terrorists, including al Qaeda in the Islamic Maghreb (AQIM), were known to be operational," J. Peter Pham, director of the Washington-based Atlantic Council's Africa Center, told DW.

"The primary training was over the course of a decade for elite units in counterterrorism," said Pham, adding that those units performed well in their duties.

'Myth of the great Malian democracy'

But with the focus on counterterrorism, little attention was paid to the political dynamics in Mali. The US and its European allies heralded the country as a model democracy on a continent where coups and corruption were all too common.

"There is always in the West this craving for a success story, and Mali at least superficially looked like a successful democracy," Pham said. 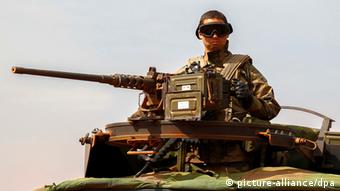 French troops are receiving logistical and intelligence support from the US

"Because of this myth of the great Malian democracy, nobody focused on the necessity of training Mali on the rule of law, respect for human rights, and respect for civilian authority," he said.

Over the course of President Amadou Toumani Toure's tenure in office, Mali became increasingly corrupt, sinking from 78th to 105th place on Transparency International's corruption perception index. And tensions between Bamako and the historically disadvantaged Tuaregs continued to simmer.

"The US government was blind to many of the real problems that were going on in the country," Wing said. "That is the undermining of the democracy itself and the corruption of the regime and the deep social frustration with that corruption."

Those frustrations came to a head in March 2012, when Capt. Amadou Sanogo launched a coup in Bamako that toppled Toure's government. 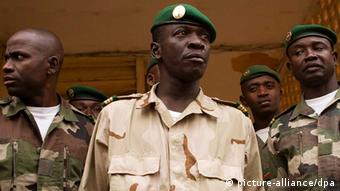 Amadou Sanogo, leader of the coup, was trained as an English instructor by the US military

"The Malian army was being humiliated in the north and was not receiving proper support in fighting these well-equipped Tuareg," Wing said. "As a result, there was a mutiny in Bamako because of this anger toward how the government was treating the Malian army itself."

Although the Tuareg had rebelled and made peace with Bamako three times in the past, the rebellion of 2012 was fuelled by regional instability following the Arab Spring uprisings in North Africa. In October 2011, the US and its NATO allies helped Libyan rebels oust Moammar Gadhafi from power. With Gadhafi gone, his Tuareg mercenaries and massive weapons stockpiles began to move into northern Mali.

"Libya wasn't the spark of the (Mali) conflict, it was the accelerant or fuel that was poured onto a spark that was already lit," Pham said. "Out of Libya came ethnic Tuareg who were experienced fighters who could easily make common cause with their ethnic kin."

With the Malian state and military in disarray following Sanogo's coup, Islamist militants associated with AQIM and Ansar Dine ousted the rebelling Tuareg nationalists and seized control of northern Mali. The militant groups Washington had sought to contain had established a sanctuary and began implementing Shariah law. 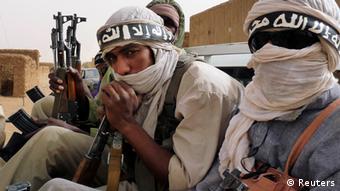 US counterterrorism efforts could not prevent Islamists from seizing northern Mali

While France has hastily intervened to stop an Islamist advance toward Bamako and reclaim the north, the US has suspended its military relations with the Malian government and called for a political solution. According to Washington, there can be no solution to the crisis in Mali until there's a legitimate government in Bamako.

"It would not be politically popular for the US government to have boots on the ground helping an African country deal with a crisis like this," said Wing, alluding to the 1993 intervention in Somalia in which 18 US soldiers were killed in street battles.

Instead, Washington may have plans to expand aerial surveillance activity in Africa. The New York Times has reported that the US military wants to establish a base for unarmed reconnaissance drones in northwest Africa. The goal would reportedly be to keep a close eye on Islamist militant groups, who migrate through the region's vast ungoverned spaces.

"This is a region where borders are meaningless," Pham said. "You can't find them - they're not rivers, they're lines on a map. Things are going to flow back and forth. Nobody has ever contained the Sahara."

French troops have entered Kidal, the last Islamist bastion in northern Mali to be recaptured in a whirlwind French-led offensive amid reports the militants have regrouped in remote hills near Algeria. (30.01.2013)

Mali soldiers are poorly trained, badly equipped and ill-prepared for battle with Islamist militants. EU military trainers will have to make up for these shortcomings, but there are doubts whether they will succeed. (24.01.2013)