A week and a half after Katrina wrought disaster on New Orleans, mail continues to pour in from DW-WORLD readers about the extent to which US policies can be held responsible and whether the US should accept foreign aid. 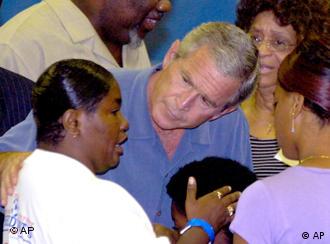 Bush has received severe criticism for his handling of the disaster.

I do believe that the US should accept German aid, and any other aid for that matter. The affected areas need all the help they can get. It's mind-boggling to imagine that New Orleans, LA is now almost completely evacuated and 70 percent underwater. I live in north-central Alabama; the damage here was nowhere near what we see in coastal areas, thank God, but we have seen our share of storm damage with previous hurricanes and tornadoes. The damage in New Orleans is unimaginable -- we have to put politics aside and HELP THESE PEOPLE. US policy shouldn't be at issue now -- saving lives should be. Placing blame for natural disasters doesn't help anyone. Especially for people who are not directly affected, it is a cynical and monumental waste of time. -- Joshua Hood

I think it is a sad time and the US is quite hypocritical to be taking aid from outside the country. I am a physician who has trained and is familiar with disaster preparedness. I am licensed to practice medicine and I am certified in advanced trauma life support. I am also a physician in the Air National Guard. I have made all kinds of inquiries with my state and local officials and have spoken personally with officials in Baton Rouge. And yet I have not been called up by my National Guard Unit and I cannot get on a team from my area. It appears that to be able to help, one has to be a politician. It appears as though the politicians and policy-makers are exploiting the situation by showing up in the disaster-torn area to look the part of providing relief rather than being in Washington making the right decisions and policies and executing them properly to prevent the kind of catastrophe that we see unfolding in the Gulf region. One wonders if the senator from Tennessee is using his unique position as physician and senator to show up for a photo op for a future run for president. He could do better by clearing up the bureaucracy and allowing the US physicians to tend to the needs of the people in this disaster. -- Angela Walker

Do you believe that attacks on US environmental policy are justified in the aftermath of the hurricane Katrina? In a simple word, NO, they are not; I find it disgusting that German officials would make such comments. Not sure what they hope to gain by their silly comments. US and German relations are at an all time low, and personally, having been born in Germany, find no love whatsoever for my former country. To blame US policies and to suggest that they were somehow responsible for Katrina is ludicrous. Don't you people have better things to do? -- Werner, USA

I think this was a very sad natural disaster and all nations should have solidarity and give support to the US. This event may have or may have not been triggered by the weather changes due to pollution. But just in case of those kinds of disasters and for the benefit of humankind, all nations should adhere to the Kyoto treaty, foremost the USA, which is the most polluting nation in the world. -- Ana

Of course US policy is wrong; it does affect Canada. This year we had the most humid and hot summer (over 40 days with the extreme heat alert; it was unbelievably hot: smog and hot air and no rain for over 30 days and many seniors and people with respiratory system problems passed away prematurely. And the problem with power supply -- who are the culprits working overtime in the US and Canada, and how many cars are there in Toronto? Maybe 2 million? I am fed up and I regret that I came to Canada in 1981 and miss Europe. Last year I visited Berlin and got so mad when I landed at Pearson into smog having boarded the plane in Frankfurt, taking in some pristine air. Bush is ignoring the whole planet and we all are paying the price and it will be worse year by year. But we are helpless and there's nothing we can do. My country is Canada now. I am considering getting back to Europe. Today in Toronto the day is so beautiful, the air is crisp, the sky is blue and the trees are green, so after finishing this I'll run to Lake Ontario and sit on a stone at the "beach" and contemplate. -- Grazyna Maria Krol

Yes, the US should accept German help! We are adults (well, most of the time) and the people and government of the US should accept aid from those who offer it. The aid is for the people adversely affected by Katrina. Those government officials that blocked the aid from other countries, and Germany in particular, have a lot of 'brass' do so when there are many people who would love to receive it and really need it. To prevent such aid at any level is infantile! -- Thomas Clark, Portland, Oregon, USA

Yes, the US should definitely accept ANY help from any country willing to send aid. But as seen from the posted article, there was some "hesitation" from US officials, and the on-going criminal enterprise that constitutes the Bush administration would rather stubbornly and stupidly refuse help offered by countries like Venezuela and Cuba, and let their poor African-American citizens die, than suspend their ideological hatred of countries they cannot bully into going along with their international war crime sprees. Hopefully the rage of conscientious Americans will now drive these criminals from power. -- Neil Murray, Bellows Falls, Vermont

The world reaction to Katrina is what one would expect. Not only is it a reaction to the US' obstinate lack of environmental concern, but also an incomprehensible lack of US emergency preparedness and organization. -- Dr. Karl Kettler

Do you think that world reaction so far to the devastation caused by Katrina has been cold-hearted? That is a tough one -- indifferent is more like it. Though the aid was offered from countries one would not normally think would offer aid. I guess that's just the reality of the world, we are the bad guy, the cause of global warming, etc. The reaction of our government leaves a lot to be desired, too slow in coming; pre-planning and coordinating was shoddy at best. Though it is hard to predict the outcome of a hurricane, the armchair quarterbacks are now having a field day as to what went wrong and how it should have been done. All we can do now is learn and get help to all of our citizens in need as quickly as possible. And really plan for a future hurricane strike, for it's just a matter of time before the next one strikes. The biggest disappointment was our neighbor to the north, Canada. It took them four days to even call our president to offer some help. If the tables were turned I know we would have been at the border asking what can we do to help. Such is life. -- Werner, Charleston, USA

Aid from around the world is streaming to the United States in the wake of Hurricane Katrina. George W. Bush has had his hands full in managing the clean-up but has also taken time to thank those who have helped. (Sept. 6, 2005)

While US emergency teams are working around the clock in the mostly submerged city of New Orleans, the German government, although highly critical of US environmental policies, is offering its help. (Sept. 1, 2005)