A Philadelphia police officer has been shot at least 11 times by a man claiming allegiance to "Islamic State." A leading Muslim advocacy group said the man "does not appear" to be an observant believer. 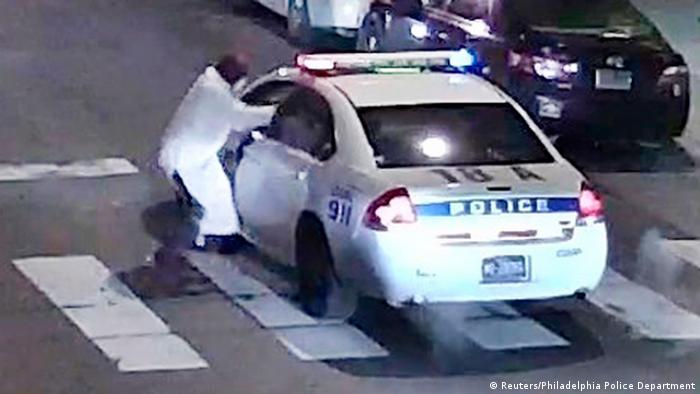 A 30-year-old man who allegedly claimed "allegiance to 'Islamic State'" shot and wounded a police officer on Friday in the eastern US city of Philadelphia.

"He just came out of nowhere and started firing on him," said Philadelphia Police Commissioner Richard Ross during a press conference. "He just started firing with one aim and one aim only, to kill him."

Officer Jesse Hartnett and suspect Edward Archer were both injured in the incident. The assailant fired at least 11 shots at point-blank range at Hartnett, who was at an intersection in his service vehicle.

"He has confessed to committing this cowardly act in the name of Islam," Ross said, adding that Archer referred to militants with the so-called "Islamic State" (IS) while in custody.

"He said he pledges his allegiance to 'Islamic State,' he follows Allah and that was the reason he was called on to do this," Clark told reporters.

The 9mm handgun Archer used was reportedly stolen from an officer's home in 2013, according to authorities.

Last March, Archer pleaded guilty to firearms and assault charges related to a 2012 case, although he was immediately released and placed on probation, according to AP news agency citing court documents.

The Council on American-Islamic Relations, a US-based Muslim advocacy group, said that the suspect "does not appear" to be an observant Muslim.

Valerie Holliday, Archer's mother, told local media that her son had recently been hearing voices, and that his family asked him to seek help. She also said he was a devout Muslim.

The attack comes amid tensions in the US and the West following a string of attacks claimed by IS.

In December, 14 people were killed and 22 others injured when a radicalized couple opened fire at a social services center in San Bernardino, California. Weeks before in Paris, a string of attacks across the city claimed at least 130 lives.