There were no massive upsets in the early women's action at the US Open on Friday. But American Madison Keys pulled off an amazing back-from-the-dead act against Japan's Naomi Osaka. 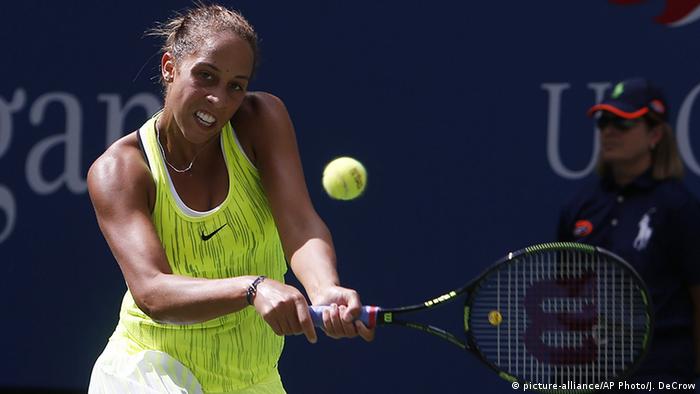 There are see-saw affairs, and then there was the third-round match played out between eighth-seeded Madison Keys and world number 82 Naomi Osaka in Arthur Ashe Stadium.

The first set made it clear that this would be no cakewalk for the favorite, with Osaka winning the first two games. Keys responded by winning the next three, and the set was level at 5-5, before the American held serve and broke her opponent.

The second set was a likewise tight affair, but it was the Japanese winning the final three games to knot the match back up.

Keys was rattled and fell behind 1-5 in the deciding set. Just when the 21-year-old American looked headed for an early exit, though, she rattled off five straight games of her own to take the lead.

Osaka managed to hold serve in game 12 to send the contest to a tie-breaker. But the hard-serving Keys prevailed 7-3 to advance to the fourth round. The final score after more than two hours of grueling play was 7-5, 6-4, 7-6 (7-3) in what Keys described as "hands down" her best ever comeback.

In other women's action, last year's runner-up and seventh seed Roberta Vinci of Italy also needed three sets to get past Germany's Carina Witthoeft. The score there was 6-0, 5-7, 6-3.

Former world number one Caroline Wozniacki of Denmark had a far easier time of it against Romanian Monica Niculescu, winning 6-3, 6-1. She now faces Keys in the fourth round.

Andy Murray progresses at US Open

Rain delayed the action on the outer courts in New York on Thursday. But under the closed roof of the Arthur Ashe Stadium, world number two Andy Murray moved into the third round with a straight-sets win. (01.09.2016)

US Open - Djokovic through to third round by walkover, Kerber advances

Top seed Novak Djokovic has advanced to the US Open third round without striking a ball after opponent Jiri Vesely pulled out injured. Angelique Kerber also went through, beating Mirjana Lucic-Baroni of Croatia. (31.08.2016)