US nuclear weapons still stockpiled in Germany | World | Breaking news and perspectives from around the globe | DW | 24.09.2009

German Foreign Minister Frank-Walter Steinmeier has welcomed a landmark UN Security Council resolution aimed at ridding the planet of nuclear weapons. He called global disarmament "one of the most urgent challenges.” 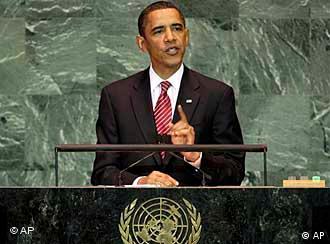 A presidential vision: a world without nuclear arms

It is thanks to the initiative of the US President, Steinmeier said Thursday in Berlin, that “disarmament has finally been given priority.”

Germany has no nuclear arms of its own, but it has a vested interest in the debate about global disarmament all the same: the nation is home to US nuclear weapons still stockpiled in the country.

The deployment of US nuclear weapons in Germany and other European countries began with NATO's "strategy of massive retaliation“ in the mid-1950s. Under the strategy, a Soviet attack on one of the alliance's member states was to have been countered with a massive nuclear retaliatory strike. During the Cold War, this protective nuclear shield was especially important to Germany.

After the fall of the Iron Curtain, NATO decided to reduce the number of nuclear arms in Germany, Belgium, the Netherlands, Italy and Turkey. Currently, an estimated 20 US nuclear bombs are stored at Buechel Airbase in the Eifel region of western Germany. 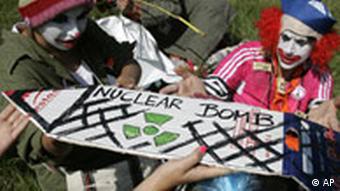 But German participation in NATO's ‘nuclear sharing' deterrence concept is controversial, and the current coalition government is at odds over the issue. Chancellor Angela Merkel's Christian Democrats are the only party to hold fast to the concept of ‘nuclear sharing'.

Steinmeier, Germany's Social Democratic Foreign Minister and his party's contender for the chancellorship, has urged a withdrawal of US nuclear weapons. The three main opposition parties regard the fact that Germany still today hosts US nuclear weapons as an anachronism.

Juergen Trittin, a leading Green Party politician, has also appealed to Chancellor Merkel to push for a withdrawal: “You don't have to hide behind the US. It is a sovereign decision by the Federal Republic of Germany whether it wants to be a participating nuclear power or not.”

The German government is behaving as if the Cold War were still a reality, said the leader of the Left Party's parliamentary group, Gregor Gysi: “Do you seriously want to say that Canada and Greece do not have an influence in NATO just because they renounced participation in ‘nuclear sharing'? With our history, we should have been the first to do that.” Gysi said Germany should now become the third country to desist from ‘nuclear sharing'.

Critics have said that Germany and the four other European NATO members who still host US nuclear weapons and all are all officially non-nuclear states, are violating the nuclear non-proliferation treaty.

The United Nations Security Council has unanimously condemned a nuclear test by North Korea, describing it as "a clear violation" of a previous resolution. Meanwhile, Pyongyang fired more short-range missiles. (26.05.2009)