US Navy to accompany trade ships through Strait of Hormuz

The US Navy is to accompany US trade ships during their transit through the Strait of Hormuz in the Persian Gulf. Their aim is to prevent interference from Iran. 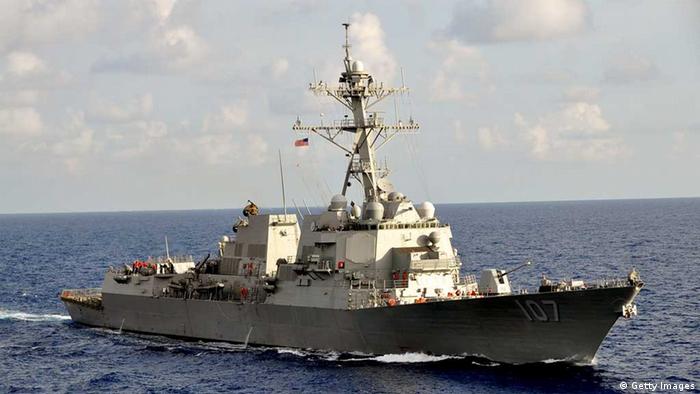 US defense officials said the decision to begin accompanying US commercial vessels as they transit the Strait of Hormuz was based on a recommendation by US Central Command, which is responsible for US military operations in the Middle East. The new US policy has been adopted in response to what Washington sees as provocative behavior by Iran.

The 5th Fleet, the naval arm of Central Command, has one destroyer, the USS Farragut, in the Gulf, as well as three smaller coastal patrol ships.

The Strait of Hormuz is narrow and partially within Iranian territorial waters.

Earlier this week, naval vessels of the Iran Revolutionary guard Corps fired warning shots near the MV Maersk Tigris, a ship registered in the Marshall Islands before detaining it and its crew.

A spokesman for the shipper, the Copenhagen-based Maersk Line, Michael Storgaard, said the company learned Thursday that an Iranian appeals court had ruled the company must pay $3.6 million (3.2 million euros) for a 10-container cargo delivered a decade ago on behalf of an Iranian company in Dubai. However, the cargo never was collected, according to Storgaard, and was eventually disposed of by local authorities.

The Iranian Embassy said the vessel would be released as soon as the debt was paid. "Iranian authorities reiterate that there has been absolutely no political or security intentions or considerations behind the incident," a statement from the Iranian Embassy in Denmark said on Thursday. "The seizure of the ship was solely an enforcement of a judicial court ruling resulting from a commercial dispute between two private parties," it added.

"Naturally the ship will be released after settlement of debts by Maersk Shipping Line and will be allowed to sail to its final destination," the Iranian statement said.

Last Friday a US cargo vessel in the Strait of Hormuz was surrounded by Iranian naval boats, before it was allowed to depart without further incident. The Pentagon called the incident a provocation and that Iran's Revolutionary Guards had "harassed" the vessel in the Gulf, raising security concerns over shipping lanes in the Strait of Hormuz, through which a third of global marine oil traffic passes.

The US Navy makes a distinction between accompanying ships and escorting them. US Navy ships will be present in and near the Strait of Hormuz while US commercial vessels are in transit, but they will not escort them continuously. They will be in continous radio contact with the trade ships and may stay in visual contact during their transit through the Strait.