The FBI is verifying a video that apparently shows a member of the "Islamic State" group executing a US journalist. The United States is currently conducting airstrikes against the group in northern Iraq. 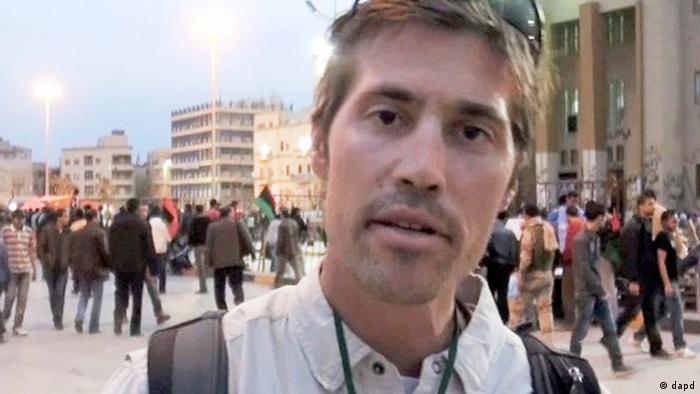 A video purporting to show a member of the group called the "Islamic State" (IS) beheading the US Journalist James Foley is believed to be authentic, US National Security Officials said.

"The US Intelligence Community has analyzed the recently released video showing US citizens James Foley and Steven Sotloff," US National Security Council spokeswoman Caitlyn Hayden said. "We have reached the conclusion that the video is authentic."

The FBI reportedly informed the Foley family on Wednesday that the video is indeed legitimate, and that and that the agency is currently conducting a longer verification process, according to the Global Post.

Earlier, White House National Security Council spokeswoman Caitlin Hayden said the administration had seen the video and that its authenticity was being analyzed by intelligence officials.

"We have seen a video that purports to be the murder of US citizen James Foley," Hayden said. "If genuine, we are appalled by the brutal murder of an innocent American journalist and we express our deepest condolences to his family and friends," she added

The release of the video came amid a US airstrike campaign against IS targets in Iraq.

The video opened with a clip of US President Barack Obama saying he had authorized airstrikes in Iraq, with text in English in Arabic. "Obama authorizes military operations against the Islamic State, effectively placing America upon a slippery slope towards a new war front against Muslims," reads the text.

In the video, a person identified as James Foley is beheaded, before another man is shown in an orange jumpsuit, with the name "Steven Joel Sotloff" written onscreen. "The life of this American citizen, Obama, depends on your next decision," a masked man says.

Following the release of the video, Foley's family tweeted an appeal for patience to well-wishers.

The 40-year-old Foley, an experienced correspondent who had covered the war in Libya (pictured) before heading to Syria, disappeared in November 2012 in the Syrian province of Idlib.

IS militants have declared a "caliphate" across swaths of Iraq and Syria, imposing a radically strict interpretation of Islamic law and signaling out religious minorities for persecution.

Earlier this week US jets targeted IS fighters on and around Iraq's largest dam - the Mosul Dam - allowing Kurdish Peshmerga and Iraqi forces to re-establish control over the vital piece of infrastructure. That operation represented the first major military setback for IS after a string of successes.

US fighter jets have also acted against IS militants advancing towards the Kurdish capital, Irbil, as well as jihadists posing a threat to Iraq's Yazidi minority.