A father and son who spent decades poring over leads in a cold case of a 1969 Ohio bank heist found their man. Peter Elliot announced Theodore Conrad died under an alias in Massachusetts earlier this year. 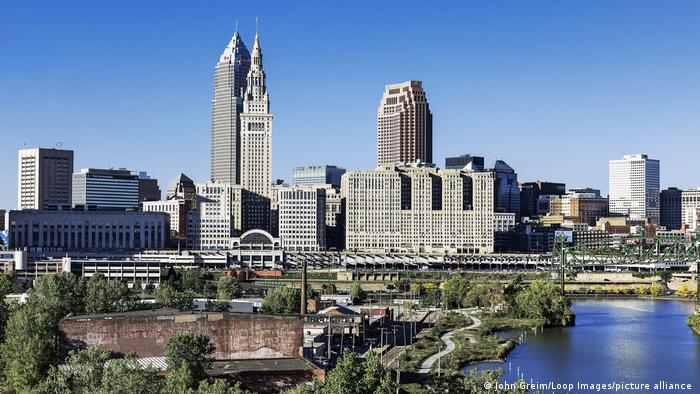 Thomas Conrad walked out of his bank in Cleveland, Ohio, with a bag full of money before vanishing

US Marshals announced they cracked the mystery of what happened to Theodore John Conrad, who at age 20 walked into work as a bank teller at Society National Bank in Cleveland on Friday July 11, 1969 and walked out at the end of the day with $215,000 cash in a paper bag before vanishing.

This past week, US Marshals traveled from Cleveland, Ohio, to the Boston suburb of Lynnfield, Massachusetts, and identified Conrad as the late Thomas Randele, 73. Conrad had been living under an assumed name.

Conrad managed to get away with one of the biggest bank heists in Cleveland lore: His loot would be worth $1.7 million (€1.49 million) in today's dollars. The fact that no one noticed that either he or the money went missing until the following Monday gave Conrad more than 48 hours on law enforcement who would spend fruitless decades in their nationwide search.

Peter Elliott, the US Marshal for Northern Ohio, said, "My father, John K. Elliott, was a dedicated career Deputy United States Marshal in Cleveland from 1969 until his retirement in 1990," who "took an interest in this case early because Conrad lived and worked near us in the late 1960s."

Elliot noted, "My father never stopped searching for Conrad and always wanted closure up until his death in 2020."

The year before Conrad's well-executed robbery, he had become obsessed with the 1968 Steve McQueen film, "The Thomas Crown Affair," about a millionaire who robs banks for the sport of it.

Conrad saw the film more than half a dozen times and told friends he planned to take money from the bank, bragging about the ease with which he could get away with it.

Over half a century, investigators were unable to crack the case, which was featured on American true crime shows such as "America's Most Wanted" and "Unsolved Mysteries." There were leads into the case across the country from Washington, D.C., to Inglewood, California, western Texas, Oregon and even Hawaii.

Since 1970, Randele had been living an unassuming life near the location where "The Thomas Crown Affair" had been filmed. He got married in 1982 to wife Kathy, with whom he had one child.

In May of 2021, Randele died of lung cancer with a date of birth as July 10, 1947, whereas Conrad's actual birthdate was July 10, 1949. His obituary renewed authorities' interest in the case, though they declined to say how or why they noticed the obituary.

Using documents Conrad had completed in the 1960s, investigators were able to match documents Randele completed when he filed for bankruptcy in Boston in 2014.

On his deathbed this year, Randele told his family he was Theodore Conrad and what he had done in 1969 in Cleveland. They did not notify authorities following his confession.

According to The New York Times, his widow Kathy Randele said in an interview Saturday, "We're still mourning his loss, and he was a wonderful dad." She declined to comment further.

Elliott said, "I feel bad for them because of a father-husband that they really never knew who he was, and also, you know, they are living under a fictitious name."

The Associated Press contributed material to this report.