Three monkeys from Mauritius have been killed after fleeing a road crash in the US state of Pennsylvania. All 100 of the animals that were being transported to a lab when the crash occurred have now been accounted for. 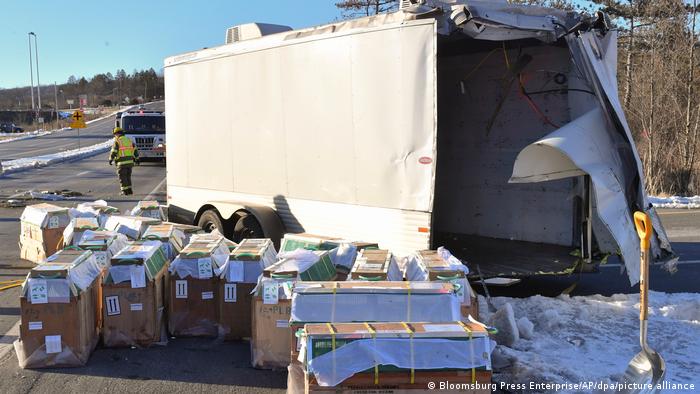 The monkeys were being transported in crates

Three monkeys have been found and killed after the vehicle carrying them to a laboratory crashed in the US state of Pennsylvania, allowing them to escape.

All monkeys from the 100 being transported from New York to the lab in the southeastern state of Florida are now accounted for, police said on Saturday night.

It had previously been believed that four monkeys were missing after the crash.

The vehicle was transporting Cynomolgus monkeys, also known as long-tailed macaques. The animals can cost up to $10,000 each (€8,800) and have been in demand for coronavirus vaccine research, according to the New York Times.

Local news said a police helicopter with thermal cameras was used to track down the monkeys, while officers on the ground used powerful flashlights.

Residents of the area were advised not to approach the monkeys and to call emergency services in case of a sighting.

The incident took place near the community of Danville, Pennsylvania on Friday afternoon. The shipment of monkeys was en route to a CDC-approved quarantine facility after arriving Friday morning at New York's Kennedy Airport from Mauritius, the US Centers for Disease Control and Prevention (CDC) said.

Stem cell research is an ethically fraught field. Now scientists in California have taken a step that's sure to jump-start a lot of discussions: They created a human-monkey embryo that survived for three weeks.